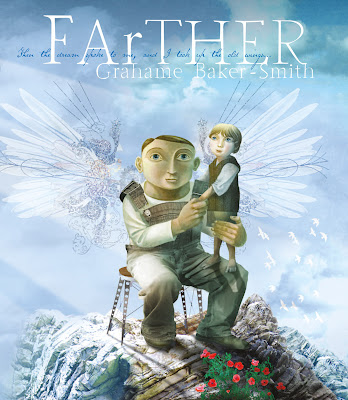 There are books for children who need fluffy chickens and cuddly bears at certain times in their lives - and there are books for children who need to fill their imagination. If you want to be visually transported into a dream world that stays with you long after the book is closed, and if you admire the work of Peter Sis and Shaun Tan, then rush out immediately and buy FArTHER. It will awaken your dreams and those of the child who shares the story with you.
FArTHER with its incredible endpapers that could have leapt from Leonardo's notebooks, and its illustrations that have me rubbing the pages to make sure they're not real pencil, ink and paper collage, is a triumph not just for Grahame Baker Smith but also for Templar Publishing.
I first notcied Grahame Baker Smith's work when Leon and the Place Between, written by Angela McAllister, and also published by Templar, was shortlisted last year for the Kate Greenaway. Who can resist a magic show with pure magic in the illustrations? 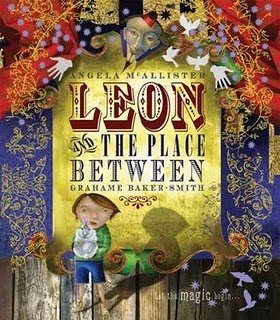 But in FArTHER we have a story that bores deeper into our inner psyche. Slightly dark with its themes of death and hope and renewal, which might seem heavy in a picture book, but not in the hands of Grahame Baker Smith, where a father who dreams of flying goes off to war, never to return, but instills in his son the courage to soar.
Don't we all want our children to soar? 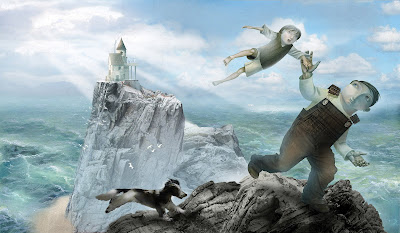 Grahame Baker Smith creates a world where the story plays out against a wild sea with a lonely house clinging to haphazard rocks. One can feel the wind and taste the salt in the air. The rock seems to epitomize the father stuck solidly to the earth even though he'd rather be airborne and the boy's realtionship with his father unfolds almost like a dream sequence. I wouldn't be at all surprised if Baker Smith doesn't wake in the night and write out or draw his dreams. Perhaps like the dream that comes to the father in tones of sepia with a dash of red - 'a busy bossy dream that would not leave him alone.'

Each page is filled with detail that demands another inspection. Strange symbols tease - the bright red poppies against the rocks - the white goose standing at the feet of the father while he despairs of ever flying - the eyes that convey the dream. The contraptions that he imagines and builds are beautiful machines with delicately spiralling cogs, gilded cages and fluted and folded wings that appear more like paper origami, or finely beaten foil with spines that suggest ancient fishing rods. Mechanical yet strangely organic, bringing to mind the contraptions built by the Wright brothers in that lonely shed on Kitty Hawk Beach in North Carolina some hundred years ago. 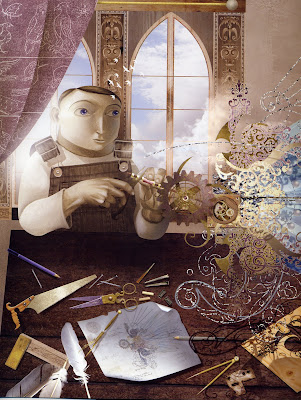 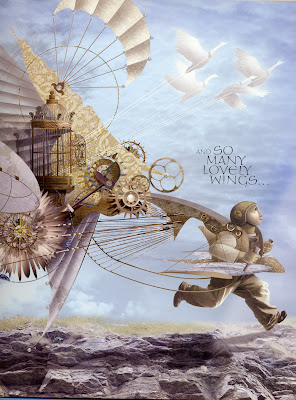 Perhaps I'm beguiled by the adolescent boy climbing the tree to stare out at the world. My teenage son used to climb a gigantic pin oak. I'd come out and find him in the topmost branches at a death-defying height standing still and silent. What was he imagining? And what does the boy in the story imagine? But however much we are beguiled by the illustrations, we haven't been tricked. It's not the medium that tells the story. It's the story that tells us. It's a big story but a convincing one. And Grahame Baker Smith engages the reader in his fictional world because he himself is engaged in the real world. He underpins the story with a truly human sense of desire, hope, fragility and loss.
Grahame Baker Smith seems to paint and draw and use photography and scan natural material and makes things from paper and fabric and generally play around with them in Photoshop in the same was as the father plays in his workshop with pieces of paper, foil, fabric and sketches to produce his dream. This recent work is radically different from his past illustration as in Little Pilot or his version of The Velveteen Rabbit. It's a big brave leap that has paid off. On the CILIP website, after winning the Kate Greenaway he says: 'It's been an extraordinary, painful, joyous, frustrating and wonderful trip. The only thing that has kept me going through all the ups and downs is a connection to my imagination.'

And what an imagination! FArTHER surprises and enthrals. Give this book to all fathers of sons and to all children who dream and need their imagination filled - and even to those who don't - because afterwards they will.

http://the-history-girls.blogspot.com/ A Heady Mix - Poetry and Perfume in Ancient Egypt

Oh wow, this book looks and sounds magical! HAVE to have it. An amazing post, thankyou!

What's great about this post is the quality of the writing and the way you transmit the powerful feelings evoked by this wonderful book. Thank you. More please!

My children (think they) are too old for picture books, but I MUST have this. I will give it to them when they grow into them again.

Gillian I've just given it to my son, whose son was born 6 days ago. I'm hoping he has grown into picture books again as he'll certainly be reading plenty of them in the future!

BEST URGENT EFFECTIVE LOVE SPELL TO GET YOUR EX/HUSBAND/WIFE BACK FAST AND TO SAVE YOUR MARRIAGE NOW CONTACT LORD ZULU ON WHATSAPP DIRECTLY +1 (424) 361‑7554.
Hi everyone I’m here to testify of a great and powerful spell caster called Lord Zulu. I was so confused and devastated when my husband left me without a word, I needed him back desperately because I loved him so much. So a friend of mine introduced me to this powerful spell caster who had helped her in getting her lover back, so I contacted him and he promised that in less than 72 hours he will come back to me. After I did all he asked, to my greatest surprise my husband who had refused to speak with me came to my house and asked for forgiveness for all he had made me go through and now we are living happily together, if you have any relationship problem I will advise you contact him for your testimonies. Below are his contact details. Contact him on WhatsApp  @ +1(424)361‑7554.