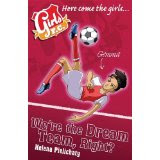 I was at the launch of Girls FC, Helena Pielichaty’s series of books about a girls’ football team. This was a very jolly affair at the Football Museum (then in Preston) and Helena was resplendent in a blue and white footie strip. Since that day, she’s brought out nine books, each one of them told from the point of view of one of the team’s members. I haven’t read all of them, but on the basis of the ones I have read I can recommend the series as perfect for anyone who likes both reading and sport.

Thousands of women in this country play football. Our team has just played in the Women’s World Cup and done rather better than their male counterparts. I wouldn’t be surprised if this was news to most of my readers. But it’s true: girls love playing football and Girls FC shows readers that you don’t have to be freakish or strange to want to do this.

Pielichaty is an experienced novelist of books for many different age groups and she knows that it’s not enough to fill your pages with good and accurate football information and concentrate on accounts of games. You need also to have an engaging story to carry the reader through the novel. You need sympathetic characters, interesting situations and a gripping plot that will make everyone, and not just those who like to play the game, eager to turn the pages.

“We’re the Dream Team, Right?” is a model of economy. In the space of 105 very widely-spaced pages we’re given a mystery which is only resolved properly on page 101 and it’s to the author’s credit that she can pull the last mystery rabbit out of the hat at this late stage and still keep us (to use some footie slang) onside. Gemma has a father who’s somewhat of a mystery. Her home life is a little different from that of her team mates. The match in the book is important but its details don’t overwhelm the human story and it’s Gemma’s relationships with both her parents and her team mates which are much more important and very carefully worked-out. The ending is a little downbeat in a particular way, but completely convincing nonetheless.

Each book in the series is narrated by a different player in the first person. This makes the books easy to read and immediately engaging and Pielichaty has a good ear for the way girls both think and talk. In this kind of quick-moving, character- based story, there’s not much room for passages of deathless prose. Nevertheless, Pielichaty describes things well: “…while the fields and hills behind us remained wedding-cake white, the snow on roads and pavements had turned into that yucky sludge.”

A really enjoyable book, this, in a series that deserves promotion into the Premiership of series fiction.

Return to REVIEWS HOMEPAGE
Posted by adele at 10:00 Permalink

Agree! The books in Helena Pielichaty's series are about so much more than football.

Absolutely! And they're not just for girls, either.

My Girls reading group loved 'Do Goalkeeper's wear tiara's?'It was a delight to read aloud and act out scenes and they also enjoyed reading it at home.

Deliver yesterday - read today! I really enjoyed it. Thank you for the recommendation.