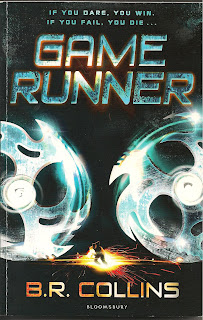 Ever since reading her first novel ‘The Traitor Game’, I’ve been quite a fan of B.R. Collins, who writes fast-moving, dark YA thrillers with a twist of horror.  More than any other writer, she reminds me of Ann Halam: and they don’t come much better than that.  She’s inventive, original, and hard-hitting. ‘The Traitor Game’ is a riveting story about an imaginary world shared between two friends – and what happens when trust turns sour.  I was less keen on her second novel, ‘A Trick of the Dark’ – still fantastically atmospheric, but let down by what seemed to me poor characterisation – but I loved her third book, ‘Tyme’s End’, an atmospheric ghost story told in reverse, from present to past.

So I was excited to see her latest book, ‘Gamerunner’, set in a future world ravaged by climate change and rain so acid it can etch glass.  To live outside in the city of Undone is to risk early death. Young Rick lives a literally sheltered life inside a vast building complex owned by a ruthless corporation called Crater which produces and markets the virtual reality games which are the opiate of the people. Rick’s work – or sport – is to run the Maze, the game developed by his enigmatic mentor Daed, who may or may not be his father.

At the beginning of the book, Rick is a naïve self-absorbed teenager who doesn’t realise the precariousness of his privileged life.  Daed has promised Crater that the Maze is an endless game which no-one will ever complete. But then it looks as if someone is about to do just that, and Rick is dispatched to stop him.

It’s a firecracker of a book – B R Collins can do pacy, nail-biting narratives like no-one else.  Careful readers will spot the parallels to the myth of the imprisoned genius Daedalus, who built the Cretan Labyrinth for King Minos, and his son Icarus who flew too near the sun...  Tension rises as Rick disobeys Daed, begins questioning the basis of his protected life, and runs headlong into terrible danger.

The play of love and anger, trust and distrust, obedience and rebellion between Rick and Daed is excellent.  But there are a few strands I should like to have seen more developed.  Near the beginning of the book, Rick steals the identity of an unknown girl, and by doing so, probably destroys her. I wanted to find out more – perhaps to have Rick encounter someone who knew her, a sister or a friend.  Instead, we never discover her fate and she remains a cipher who causes him some guilt but no real distress. And Rick is not a particularly likeable character.  We can pity him but not love him.  He doesn’t grow much through the narrative.  He is disillusioned, but otherwise remains much as he began – inevitably, since he forms no new relationships. I had the feeling that, at some points, the imposed framework of the myth was constricting character development and plot.

All in all, though, ‘Gamerunner’ is an absorbing and relentless read.  I highly recommend it, and look forward to B R Collins’ next book.

Return to REVIEWS HOMEPAGE
Posted by Katherine Langrish at 08:00 Permalink