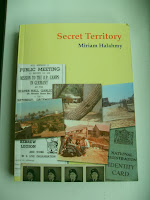 (The yellow cover is the one on the copy I have. The other cover is what I found on Amazon. I thought it best to show both.)


Miriam Halahmy is best known as the writer of HIDDEN which came out last year and which tells of the adventures of a teenage girl who rescues an illegal immigrant washed up on Hayling Island. This novel is for adults but there's nothing in it that would be unsuitable for younger readers and I think a great many of them would greatly enjoy it.

This is the story of Eve, who is dropped by her Gentile boyfriend for being Jewish. "It just wouldn't work," he says to her. She is devastated. She goes to Israel both for the traditional 'finding herself' reasons and to get away from everything that's familiar to her and also because there is in her family history a certain mystery.
Eve feels that she ought to have been born in Israel and blames her father and mother for coming back to England and preventing her from being a 'sabra': a native-born Israeli.

She goes to work on a kibbutz (communal farm) and also on a moshav (a small village, basically) in the Golan Heights. We are in the 1970s, after the Yom Kippur War and the Golan Heights were captured from the Syrians in the 1967 Six Day War.

As a counterpoint to this narrative is the story of Eve's father who was involved with the Irgun during the run-up to the setting up of the state of Israel in 1948. The Irgun is the name of a militant grouping which was responsible for, among other things, the blowing-up of the King David Hotel in Jerusalem. Their aim was to get the British, who had a Mandate at that time over the whole of Palestine, out of the territory.

It's a fascinating time in history...or actually TWO fascinating times...and Halahmy conveys well the emotions of everyone involved with the turbulence. The shadows that the past casts over the present are vividly demonstrated as are the difficulties of knowing even your own history properly. Eve finds out that she had a brother whom no one had ever mentioned to her before. Everyday life in Israel is accurately depicted, and we meet a great many different characters who are all well fleshed-out, but it's the main characters,Eve in the 1970s and Jack and Deborah in the 1940s, with whom we must identify.

The events of the novel occur before the rise of the PLO and before the Intifada and in any case, the difficult situation of the last four decades or so is not what concerns this author in this book. Anyone reading it will enjoy discovering much more about something most British readers know woefully little about: the beginnings of Israel and the way it was just after the war in 1973. Most of all, readers will care about how all the personal stories are resolved.

Return to REVIEWS HOMEPAGE
Posted by adele at 08:00 Permalink

It's a brilliant book, I have read it, and deserves a wide audience.