THE WISH HOUSE by Celia Rees 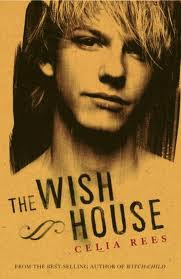 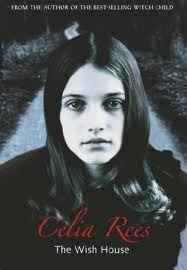 The Wish House reviewed by Dianne Hofmeyr
I loved this book. I grew up rebellious and grumpy. At age twelve on holiday in a new city, I once asked my parents to walk on the other side of the road to me. They being kind, loving and understanding parents, complied. Later as an awkward fourteen year old all I wanted to do was get away from what I thought was my very humdrum, ordinary family. I lived in a small seaside village and in the summer of ’61 when a local artist asked me to help in his studio/shop I thought I had reached the pinnacle of sophistication. So when I read Celia Rees’s The Wish House I had a strong sense of déjà vu.
The Wish House is that perfect story that tells of this transition between childhood and a very different more adult world that confuses and excites. Rees has said on the backflap: ‘Everyone has special places and special summers, special people, that combine to create times they will never forget.’
Richard on his annual camping holiday in Wales goes exploring and finds the passions, undertows and intrigues he yearns for in the messy, bohemian lifestyle of the summer people living in the Wish House. The contrast between his own caravan-holiday family experience and this family with its rowdy mealtimes, pot-smoking son, half-naked mother and brooding artist father, is vast. He can’t keep away. And he especially can’t keep away from the daughter Clio, with her dark hair and mysterious violet eyes.
Celia Rees constructs her novel in a compelling and mystical way, adding new dimensions brush stroke by brush stroke so that just when you think you know what's happening, something new is revealed. She’s clever at with-holding information. The reader, like Richard, is almost beguiled into believing one thing when in fact the reality is something else.
The way Richard and Clio meet up in the forest is a perfect example of her ability to capture an inchoate moment that leads breathlessly on to something far more powerful. The forest with its wildness and lack of containment unleashes in them both a wild playfulness. Their energy and awkwardness goes into playing highly imaginative almost childish games of gods and hunting that bring them to edge of what Richard truly wants to experience… a sexual encounter.
The characterisation is superb. Clio, Richard’s obsession, could easily have in a lesser writer become a cardboard figure but Celia Rees manages to imbue her with unexpected reactions so the reader, like Richard, can’t pin her down. She remains remote almost adult, but in brief moments, the shellac of her character cracks to reveal the fragility of her youth. These surprising moments of vulnerability are what make Celia Rees’s writing so powerful... that and her ability to evoke scenes, whether a crazy bonfire moment on the beach or a wild Bacchanalian feast, or the bleakness of the caravan park itself, that imprint as vividly as film in the mind.
The story is interspersed with descriptions of paintings from Clio’s father’s retrospective exhibition. But Rees uses a very different language for these descriptions. The words are coldly analytical and dispassionate even though they are describing scenes with undertones of sexuality that reveal a tangled web of intrigue. The removed voice adds texture and expands and almost reflects as if in a mirror for Richard, his own sexual awakening and experience of what happened that summer.
As in all her books, Pirates, Witch Child, and Sorceress, Celia Rees writes strong female characters so that even though this story is essentially about Richard and told through his viewpoint, the reader feels it's also Clio’s story. For them both, the summer has been a period of growing up that evokes deep memories. In revisiting the summer through Clio’s father’s retrospective exhibition, Richard is able to see it as a capsule in time and is able to move on.
Highly recommended for someone who wants an unusual and vibrant read that perfectly captures a moment of vulnerability.
The Wish House published by Young Picador UK in 2005 ISBN 978-0333947395
The Wish House published by Candlewick Press US in 2006 ISBN 978-0783629519
Reviewed by Dianne Hofmeyr www.diannehofmeyr.com
Celia has a blog up today Sat 8th on ABBA http://awfullybigblogadventure.blogspot.com/2011/10/notebooks-celia-rees.html


Return to REVIEWS HOMEPAGE
Posted by Dianne Hofmeyr at 06:00 Permalink

This is one of my favourites of Celia's books and it's so good to see it reviewed. I am going to link to this review on Twitter.

This IS my favourite of Celia's books - the one I wish I'd written. I enjoyed your review.

hey how much dose the wish house cost for a day