The Clark family never go on holiday; their summer is usually spent doing d.i.y. That is, until they see an advert for the perfect get away - a house swap. The advert reads:

The Clarks set off and find that their new home is more in the sea than on the sea - it's a pirate ship, complete with ship's parrot and crow's nest.

Rather than being daunted, the family actually embrace the pirate's life. Soon enough they are navigating by the stars and having the time of their life. Back at the Clark's home, the pirates too are getting used to landlubbing ways.

This picture book is witty and inventive. There are visual jokes running through it (for example, even the mice have to learn new skills alongside their resident families) which will please children. There are also some great jokes for adults too - in the wanted ads in the newspaper we see the notice:


"For Sale: magic beans. Not for eating. May cause giants. One cow o.n.o."

At its heart, this is a story about resilience and bravery in the face of new experience. It is also a light-hearted look at how people with different cultures rub along together. I particularly liked the Clarks' return home, where they discover that the pirates have been doing some d.i.y. of their own. Lots of the damage can be repaired, but some changes are permanent. Next door's cat, for example, won't be giving up his earring any time soon.

Pirate House Swap is a great book to share with the top end of picture book readers who will enjoy decoding the pictures alongside the words. It's a great, gender-neutral companion to Abie Longstaff's The Fairytale Hairdresser which had a same delightful humour, but was a bit pink to be shared with boys. 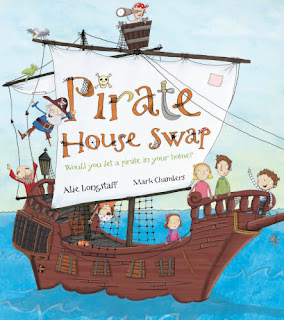 Return to REVIEWS HOMEPAGE
Posted by Elen C at 06:30 Permalink

Sounds delightful. Will look out for it!

looks interesting going to try it out.