The Firebird Trilogy by Nick Green reviewed by Julia Jones

I've just read the three parts of Nick Green's Firebird Trilogy as one big book. It's been a terrific experience and I'd happily go back to the beginning and start again. 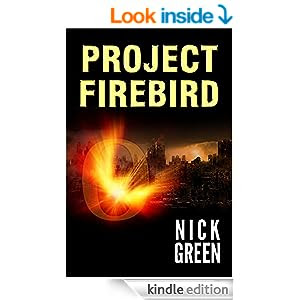 Leo Lloyd Jones is a teenage joy-rider from Salford who is picked – accidentally, he assumes – to be part of an elite group of youngsters who might be required to rehabilitate the world in the case of cosmic catastrophe. This is Project Firebird. Now I don't normally do much in the way of cosmic catastrophe and my appetite for dystopias is distinctly limited. But I love adventure and stroppy teenagers and their capacity for moral decisions and courage and emotion and idealism and that's what Project Firebird gave me.

Leo's quality is leadership, the indefinable sort which is something quite different from ambition or the desire for power. Most of the time he's completely unaware of it but when push comes to shove he's usually able to make the right choices and find the words to inspire others. On his first day at Project Firebird he is sitting next to fourteen year old Rhys Carnavon, the fit, good-looking ' natural leader' who has just trekked back from Antarctica after witnessing the death of his scientist father. The shifting relationship between Leo and Rhys is a main plot strand running throughout the trilogy. It's complex, does not allow for second guessing and has a resonance beyond the individual characters. It's one of the reasons I'd like to read the trilogy again.

Plotting is excellent throughout. For me the books really began to sing at the shift between volumes one and two, Project Firebird to Firebird Dawn. The shock at the beginning of the second volume was, I thought, brilliantly managed – especially when an unexpected twist and additional layer of complexity was revealed later in the book. Another welcome moment was the emergence into the open air. Nick Green seems to be particularly good at evoking effects of light on landscape and glistening natural beauty. Not that the post-disaster countryside is uniformly lovely: there are methane flares from pockets of rotting garbage and a glimpse of a survivor spending his (short) life melting down abandoned plastic. One imaginative insight I especially enjoyed was Leo's occasional sense of his 'own' landscape – Salford, Manchester, the M6 motorway – buried a thousand years below the landscape on which he and his friends are struggling to survive.

There's cruelty and loss in this second volume but I feel somehow that it's the most human of the three. That's a descriptive not an evaluative point. The mainly female Blackwater village, the ruthless Dustral raids are small scale in comparison with the brutalities and stark struggles for existence in the final volume Firebird Radiant. That's fine. I think trilogies should work rather like symphonies with themes introduced, developed and brought to some resounding climax. AS such, however there the obvious danger or predictability and one of Nick Green's clevernesses in his third volume is to counterpoint the megalomaniac’s bid for global domination with the intimate domesticities of broken nights and nappy changing.

There are thrilling action sequences, delicate moments of relationship and some extraordinarily fine descriptive writing throughout the trilogy. There's also plenty of intellectual content and much to reflect on and discuss in our management of the natural world. I rather hope that we are sufficiently co-operative to establish a Global Seed bank to preserve crop varieties – currently I hear more about fragmentation and restrictive patenting. These books could be offered to consumers of The Hunger Games or Malorie Blackman's Noughts and Crosses. Instead each volume is available for £1.85 on Kindle. I don't think this is ideological statement: I think this is 21st century publishing's failure.

I too really enjoyed the first book - I'll have to get the next two and catch up with Leo and company, it sounds as if it just gets better. I agree - it's mental that no one picked it up to publish conventionally.

The global seed bank is already a factually existing reality, on Svalbard.

Just finished the last two - I have to agree with you Julia, that this is not published and in every bookshop is a crying shame.