The Rabbit Problem, by Emily Gravett, reviewed by Pippa Goodhart 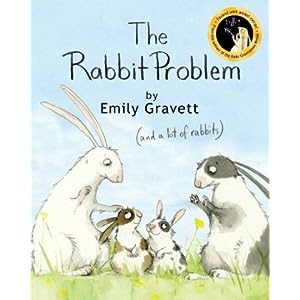 This is a fascinating, funny and beautiful book which is more of a starting-point for readers, for parents and teachers, than it is a fully realised story.

I'm sure that young children find lots of interest and amusement in the pictures of growing numbers of characterful rabbits, counting them and spotting little visual stories happening, but really this is a book for children of perhaps six plus.  Created to work as a calander (it even has a hole so that you could hang it up), the double-page spreads chart the monthly changes that occur in Fibbonaci's Field.

I had never heard of Fibonacci or his mathematical theory based on rabbit breeding, but a bit of googling tells me that this Italian mathematician in 1202 (would he have been amused to think that he was being mentioned in relation to children's books in 2012?) investigated how fast rabbits could breed, given ideal conditions, assuming you begin with a single rabbit who is joined by one other of the opposite sex, and that each breeding session results in another breeding pair.  Rabbits apparently reproduce once a month once they've reached the age of two months.  The results are hilariously depicted by Emily Gravett as the watercolour field that changes through the seasons becomes inhabited by more and more and more rabbits (all depicting very human emotions), and culminating with a wonderful pop-up explosion of them!  Any scruples about brothers and sisters mating have to be cast aside (I've no idea whether or not rabbits cast them aside in real life!).

So this is a book that raises questions mathemetical and biological which an imaginative teacher could develop, and actually develop into just about every area of the curriculum.  Carrot printing, carrot recipes, knitting, rabbit exercises, newspaper reportage, growing seeds, the weather, time passing, population growth leading to rationing, temperature, genetics, reproduction, measuring, and more are all there to be found and developed.  Why not have a Rabbit Problem week for your class?  And if you want a fully rounded story, then why not get each child to pick one of those rabbits, and write their particular story?  Then they could be 'their' rabbit in an assembly drama of the whole book, ending with every one of your class rabbits leaping into the air!

Return to REVIEWS HOMEPAGE
Posted by Pippa Goodhart at 02:00 Permalink