Socks Are Not Enough by Mark Lowery - Reviewed by Jackie Marchant 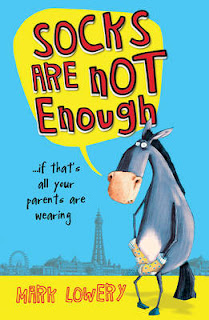 Michael Swarbrick is 14.  He’s at what you might call a sensitive age.  Already ashamed of his odd looks, at the mercy of a good-looking girl-magnet brother who calls himself ‘The Stevenator’, forced to train with a swimming club even though he’s useless, hated by the father of the one girl he admires, who is also his swimming coach, things couldn’t get any worse for him.
But they do.
Starting with the discovery that his parents are naturists.  From which moment on, now that their secret is out in the open (so to speak) his mother decides to stop wearing clothes around the house.  As I mentioned, Michael is at a sensitive age, so he finds this excruciating.  And that’s before the incident with the Coco Pops, after which he will never eat that particular cereal again.  Then things get a whole lot worse, as his best friend keeps trying to visit Michael for a peep at his mother and his brother starts dating the girl of his dreams.  And that’s before he gives said girl a black eye and his parents become naked terrorists.
It’s about this stage that the school nurse and the shrink get involved and the fun gets even funnier.  And then there’s the donkey . . .
As well as the odd list (and they are delightfully odd) Michael tells his story mainly through his ‘dealing with feelings’ sessions with the school nurse and the shrink.  As he refuses to speak, he writes everything down so that we learn about what has happened session by session.  At the same time we are treated to some hilarious interaction between Michael, the nurse and the shrink – who is convinced that it’s all about the donkey.
This is a hilarious debut from Mark Lowery, who I am very pleased to say is now working on the second Michael Swarbrick book.  If it’s as good as this one, then we are in for a treat.


Return to REVIEWS HOMEPAGE
Posted by Jackie Marchant at 12:30 Permalink

This review makes the book sound even funnier than when you talked about it last week! Thanks!

And the book itself is even funnier!