THE DAMAGE DONE by Linda Newbery. Reviewed by Ann Turnbull 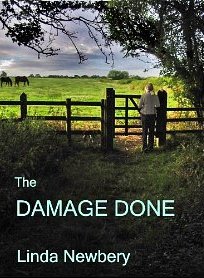 One of the pleasures of train travel is the opportunity to read for long stretches of time.  I recently took my Kindle on a long journey and read this book - one that I'd missed when it was first published in 2001.

I always enjoy Linda Newbery's novels, and this is now one of my favourites.  Although written for teenagers, it's likely to appeal just as much to adults.

Seventeen-year-old Kirsty suffers from night terrors and a fear of crowded places.  She tells lies to her friends and family, inventing imaginary boyfriends and finding excuses for being unable to go out.  Her mother has remarried; her father, a writer, is interested only in his work; and her beloved older brother Jay has gone to America.  Kirsty has failed her exams and refuses to return to studying, despite pressure from her mother.  She prefers to be involved in household tasks and caring for horses.  But the responsibility of running the family home and livery business weighs heavily on her - especially when local people hear of a spate of vicious attacks on horses and the police are known to be looking for suspects.

Kirsty meets Dally, a mysterious and offhand young man employed nearby as a gardener.  Like her, he clearly has family problems, though he will tell her nothing about himself.  She is drawn to him - but can she trust him?

Linda Newbery's writing has a measured quality, and yet she always maintains tension.  Her story unfolds at its own pace, and there is a sense of the seasons, of trees, water and weather, and of the beauty and grace of horses and their natural lives.  Several threads of mystery run through this book, and secrets reveal themselves gradually.  Kirsty makes mistakes, but in the end she comes to a better understanding of herself and others.

This is a story that makes a plea for not forcing either animals or people to conform, but allowing them to take their own way.  I found it a compelling read.

Return to REVIEWS HOMEPAGE
Posted by Ann Turnbull at 07:30 Permalink

I'm very fond of this book of Linda's as well...good to see a review of it here.

Thanks for reminding me about this book. Glad it's now available again on kindle.