Michelle Paver is best known as the author of the hugely successful Chronicles of Ancient Darkness series; but in Dark Matter she takes the darkness to a deeper level - one which, as she says in the back-of-the-book-interview, would be too much for a children’s novel. 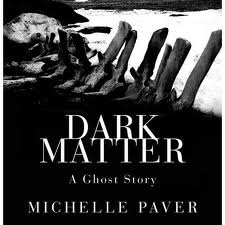 The year is 1937, and Jack Miller, an impoverished young physics graduate and export clerk, accepts the position of wireless operator with a geological and meteorological expedition to an island off the north coast of Norway.
Socially isolated at home and very much aware of the class divide that separates him from the other members of the team, Jack at first revels in the stark beauty of the Arctic.

The expedition, however, is dogged by bad luck, and circumstances eventually conspire to leave him on his own in the darkness of the months-long Arctic night. But although left by himself, Jack is not entirely alone...
Dark Matter is in many ways a good old-fashioned ghost story; but what sets it apart is the ingenious setting. Alongside the sense of period, Paver conjures up the bleakness of the Arctic and the darkness of its winter quite wonderfully, and with them a genuine sense of Jack’s fear. The development of Jack’s character - his own thawing-out and the slow divesting of his habits of solitude - are deftly handled, and make his eventual isolation and the events that follow all the more harrowing.
This is not one to read by yourself on a long winter’s night unless you really enjoy being scared; but it is a great book, and one that is as beautifully written as it is suspenseful. Recommended for all but the faint-hearted.


Return to REVIEWS HOMEPAGE
Posted by Penny Dolan at 11:50 Permalink

I read this and thought it was a very strong story. Powerful sense of place and powerfully spooky!

We were all reading this book here last Christmas! It's a great ghost story, and the author's knowledge of the territory makes it all the more believable.

I agree, it's a great story with such a hint of menace, not one to read on a dark and stormy night!