THE WINTER OF OUR DISCONNECT by Susan Maushart. Reviewed by Adèle Geras 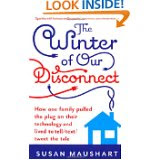 This book was lent to me by Yvonne Coppard, a member of the SAS whom a great many of the readers of this blog will know. She said it was funny and interesting and she was quite right. I thought it worth drawing to the attention of ABBA readers because it addresses a problem that a great many people share. The author, an American by birth but a longtime resident of Perth, Western Australia, tells the story of a six-month period when she pulled the plug, as she puts it, on Ipods, Iphones, laptops, computers, games consoles etc....everything that connected her children and herself to the world of the Internet.

Inspired by Thoreau's On Walden Pond she took a decision to go 'screen-free' as an experiment. To see if she, a very wired journalist, and her three teenage children, could survive without the help of the World Wide Web. The short answer is: they could and they did. The long answer is the book itself, which is full of careful research into the effects of being plugged in to such things as Facebook, Twitter IMS etc as well as an account of the daily lives of this family and how they reacted, individually and collectively to being without their precious devices.

If that makes it sound dry and dusty and boring, nothing could be further from the truth. It's a hilarious read at times and Maushart has a wonderful way of turning a witty sentence. She describes a world where everyone is so hooked on their phones, Blackberries etc that the real world has practically disappeared. And Maushart is as bad as her children. Away from her home in the USA, she still, after many years, feels not quite at home in Australia and the internet brought her nearer to people and places she longed for. The family was still able to access the internet at school or college or a cafe... just not at home.

To say the changes wrought in the teenaagers were miraculous would be putting it a bit strongly but the progress she charts in each of her children is amazing. The changes are brought on by having to deal with BOREDOM. It's a salutory lesson to all parents, I think, that being bored and learning how to deal with it leads often to great creativity. We are all, she says, too anxious to ensure that every minute of our children's lives are full of things to do. Maushart's son, for example, moved from being someone who barely exchanged a word with his family and stared at a screen for hours in a day to becoming a whizz on the saxophone and a Haruki Murakami completist. Do give yourselves a treat and read this book. It may very well change your life. The message, though, is one of the oldest in the world: everything in moderation.

Thanks for reminding me about this book. The trouble with lots of publicity, R4 focus and so on is that sometimes one never gets around to reading the whole book. I have to go to my local library today so they may have a copy. Yes, a library - there's a connection there somewhere.

This is truly thought-provoking. Thanks, Adele! I wonder what the ideal proportion of real to unreal experience gives us the fullest life - and where the electronic media fit into that spectrum?
And how about ballet? And novels?
I shall now have to go away and ponder this for several months, at least...