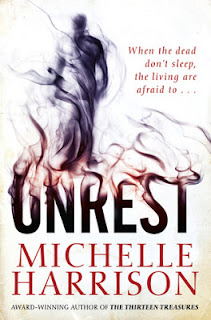 Michelle Harrison is best known for her award-winning Thirteen trilogy - The Thirteen Treasures won the Waterstones Prize and the subsequent books were equally well received. Her latest novel, Unrest, is aimed at an older audience and allows her to explore much darker themes, which I'm delighted about as I think she has a definite gift for the macabre.

Unrest is the story of seventeen year old Elliott, who starts to suffer from horrific nightmares following a hit and run accident. The dreams follow a pattern and he starts to suspect that they are not dreams, but contact with the spirit world. Desperate to shake the nightmares, he takes a sleepover job right on top of a haunted hotspot. Then the horror really begins. Elliott realises that while he's roaming the dream world, something is occupying his body. And one day, it decides not to give it back.

From the electrifying first chapter right through to the breathless climax, this book gripped me. Even when I was terrified and squeaking under the duvet, I couldn't stop reading. The descriptions are sumptuous and evocative; Past Times, the working museum where Elliott goes to work, is brilliantly conceived and described. I also liked the skilful way Michelle Harrison unfolded her characters' secrets, showing only enough to move the story along and never giving anything away until she's ready, so much so that I'm starting to wonder if she is secretly Derren Brown. Ophelia, Elliott's colleague at the museum, was especially fascinating and I really felt for Elliott's long-suffering father. Fom the very first moment, I could picture their squalid flat and imagine the dull drudgery of their day to day existence. I wanted to read on as fast as possible but also to linger over the masterful use of words. What I longed to do more than anything was to give Elliott a big motherly hug.

If you're after for a high quality ghost story then look no further; as scary as The Woman In Black but with a truly terrifying concept at its heart - anyone who has suffered the nameless dread of sleep paralysis will shudder in recognition at some scenes, and probably wonder whether there really was something lurking in the darkness as they lay there, unable to move. I know I did.

I read this book before going to sleep each night and it kept me awake long after the light went out. As Mummy to a one year old, the only places I get a bit of peace and quiet are in bed or soaking in the bath. Thanks to Unrest, I won't be relaxing in either for a while.

I've read this and it had the same effect on me. It's really gripping and very scary, absolutely agree with you!