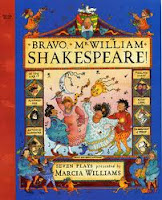 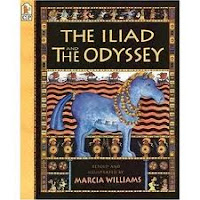 I’m not sure how well known her work is. Most highly celebrated picture books offer smart, sharp & clever ideas and are intended for younger readers. Marcia’s style doesn’t fit that model.

Her artwork is detailed, complex and patterned, and is often set in a gentle form of comic strip layout.

Her many titles include important adaptations: “The Iliad and the Odyssey”; “Chaucer’s Canterbury Tales”, “Bravo, Mr. William Shakespeare!” ande a recent book “Oliver Twist and Other Great Dickens Stories” is crammed with best loved stories and scenes and characters.

I suspect Marcia Williams titles aren’t the easiest to shelve as they don’t fit easily into popular categories or age-bands. Their content and detail suits middle KS2 readers (or even older) rather than younger children. Her intricate pages are ideal for adult-and-child reading together or for a child’s quiet poring as they follow the dialogue within the speech bubbles.

However, the title I’m reviewing today is “My Secret War Diary by Flossie Albright” – or as she writes warningly inside “A WAR DIARY KEPT BY ME FLOSSIE ALBRIGHT WHO’S NINE YEARS OLD AND NEVER TOLD NO FIBS!” 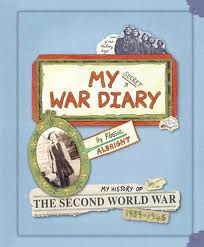 The book is a carefully designed facsimile of a child’s handwritten war diary from 1939 to 1945. It shows the changes in seasons, hardships and hopes against the flow of national and international events. I have never come across a book for children that offers such a strong impression of the length of the war – Flossie is fifteen by the end -  as well as the changes war brought to ordinary lives.

Marcia Williams creates a believable, rural Dorsetshire. Flossie and her baby brother live in Great-Uncle Colin’s cottage on General Mole’s High Barn estate. Her mother is already dead from pneumonia after baby Boo’s birth so, as her father joins the army and leaves home, Flossie uses her secret diary to record her feelings and her life.

Although there is sadness and loss, Flossie’s voice is optimistic, resourceful and brave and the book itself is essentially hopeful and cheerful. Flossie decorates her handwritten pages with careful coloured pencil drawings. She illustrates everything that interests her, whether the cat and its kittens, her naughty little brother, Cook at the big house or planes dropping bombs. Flossie also pastes in extracts of speeches, news items, newspaper clippings, photographs and maps as well as her own versions of public information posters. Most precious of all are the longed-for letters and postcards from her father in the army.

Flossie writes about such subjects as battling to look after Boo:
“I helped Uncle C in the garden. Boo ate a worm – I have to watch him every flipping minute! Uncle C says worms are full of protein so he won’t die!”

and the time when she, with Jewish refugee Simon, refuse to leave the Cottage when Uncle Colin is very ill:
“Saturday 18th December 1943. THE SIEGE! We’ve locked ourselves in the Granary! Dad is banging on the door and swearing words that don’t come out of no comic. SAY WHAT YOU LIKE, WE AIN’T BUDGING!”

The diary includes many insights into rationing, into how children were expected to help with work in fields or gardens, as well as the arrival of evacuees from the city, silly young WRENS getting into trouble as well as the effects of the bombing of cities at home and abroad. Even “my lovely, lovely cousin Frankie”, only a little older than Flossie herself, is killed in France, and there are other casualties.

Flossie’s diary is a book for dipping into over time. It is full of things to read and examine and every spread is as rich as a chapter. The pages are decorated with little letters and notes to be unfolded, comments in secret code, gentle jokey cartoons, skipping rhymes and much, much more. The book is good “reading value”, but I feel it is also a pleasure in its own right.

This Christmas, I am giving “My War Diary” to a child who is beginning to be interested in history. Why? I like the book, as I’ve shown, and think she’ll like it too, among the other titles.

But I’m also giving this book for another reason. Sometimes, when visiting primary schools, they seem to “have done” or “ are doing” WWII so swiftly that I worry the sense of history gets lost, that the period has almost become an “I was an evacuee” letter writing exercise. (If I’m wrong, I’m glad – and I have lots of sympathy for teachers with an overcrowded curriculum and workload!)

Not everyone will read “Goodnight Mister Tom” or “Carrie’s War”. “War Horse” offers a different, all-action, kind of animal story. This book is a human story, based on the area where Marcia Williams own family lived during the war. It is a useful reminder of that long, hard time and what both children and grown-ups faced during those years. I am glad that Flossie’s scrapbook exists and that it offers a glimpse of that "British wartime spirit" to twenty-first century children, as well as Flossie's desperate longing for peace and an end to the war.
(There’s also “Archie’s War” by Marcia Williams although I haven't seen it. Maybe worth looking out for that as well?)


Return to REVIEWS HOMEPAGE
Posted by Penny Dolan at 23:17 Permalink