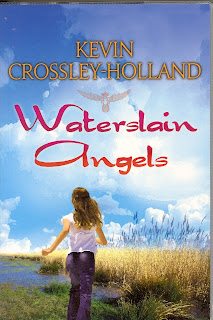 There were once fourteen angels in the hammerbeam roof of Waterslain church.  The carved wooden figures, painted in vermilion, green and orange, were taken down and hidden at the time of the Civil War to save them from destruction by Cromwell's soldiers.  And now - in 1955 - no one knows where they are.

Ten-year-old Annie goes with her parents to a display about the history of the village.  One of the exhibits there is a beautiful carved angel wing, found in the attic of the vicarage.  At the same event Annie meets Sandy - a newcomer to the village but whose mother was a Waterslain girl - and the two children soon join forces and become determined to solve the mystery of the lost angels.

Annie begins to dream of angels, and in her dreams she makes discoveries and gains insights into the secret of where they might be hidden and who else is seeking them.

At a simple level, this is a mystery story with two brave children, clues, a race against time, and a villain who may get to the angels before they do.  But it's much more than that.  For a start there is Waterslain itself, the village by the sea, which holds within it all the history of the people who have lived there: people like John Chisel, the man who carved the angels; the rector who hid them; the people who remembered the story over the years; the American airmen (one of them Sandy's father - an airman, and a wingman) who lived and died there during the Second World War.  Then there is the wider landscape of the north Norfolk coastline.  Annie's world is one of sand dunes, rocks and shining water, shrimps and boats and seaweed, lovingly and beautifully described.

Annie herself is bold and resourceful and lets nothing deflect her from the quest.  She's a great heroine, and imaginative children will be thrilled by this story while responding to the power of Kevin Crossley-Holland's writing.  It's a book for children but adults will enjoy it too, especially those who know and love Norfolk.

Return to REVIEWS HOMEPAGE
Posted by Ann Turnbull at 07:00 Permalink

Ann, this sounds a wonderfully atmospheric book as well as having a "detecting" plot that readers, you and old, find compelling. I love the wide Norfolk skies so angels wings seem very fitting. Let alone the link to planes & flight.

With the 1950 setting indicated, I wasn't sure of KCH's Waterslain Angels pub. date but found it was published by Orion in 2007 - and is still available at you-know-where and other places too, no doubt. Thnaks for this review.

Thanks, Penny. Yes, I realised after posting this that I'd forgotten to give publication details - sorry! It's also available in a large-print edition (without Alan Marks' pictures). That's the one I read, from my local library.

That was an excellent post. I just discovered your blog and wanted to say how much I've loved reading your writings. http://www.authorstream.com/EmailMarketing1/