The Adventures of Achilles, by Hugh Lupton and Daniel Morden. Reviewed by Saviour Pirotta. 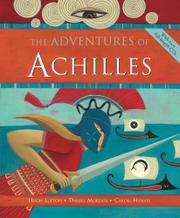 Hugh Lupton and Daniel Morden are well-known performers on the storytelling circuit, having wowed audiences around the world with their shows for many years. For those who have never managed to catch one of their live performances, Barefoot Books have produced this gutsy retelling of Homer's Iliad, based on one of their shows.

This is the story of Achilles, one of the greatest warriors in world mythology and certainly the biggest hero in ancient Greek culture.  We witness his birth, the son of Thetis, a nymph, and Peleus, king of the Myrmidons.  We follow him through childhood, focusing on the event where his mother dips him in the dark waters of the River Styx so that he would become invincible to spear and sword. And we join him as he leads fifty ships and an army of myrmidons across the sea to Troy.

Lupton and Morden's language switches effortlessly from poetic language inspired by Homer to pacy narrative as the story progresses.  This is a violent story and the authors do not shy away from the stark imagery.   During a battle, Achilles 'severs heads with every stroke of his sword.'  As he faces Hector, his arch enemy and slayer of his special friend, Patroclus, the Trojan notices how Achilles' armour is dripping with blood and gore.

But there is magic and enchantment here too.  The defeated warrior Cygnus turning into a swan at his dying moment! Zeus summoning a golden cloud to veil his tryst with Thetis! The gods presenting King Peleus with an army of Myrmidons, robot soldiers that look like men but act like warrior ants. And the symbolical ending describing a tree on Achilles' grave links the past with the present, highlighting the fact that this is a story for all time.

Aimed at confident readers, the book is available in paperback and hardback with two audio cds.  Carole Henaff's illustrations, mostly inspired by Greek pottery and laid out like tapestries, make it an ideal gift book for older children too. Highly recommended.

Return to REVIEWS HOMEPAGE
Posted by Saviour Pirotta at 09:00 Permalink

I haven't seen them perform this but I was lucky enough to catch The Sleeping King last October and it was brilliant!

This sounds a wonderful retelling and the CD will make the book a valuable resource for schools and teachers too.