The Town in Bloom by Dodie Smith reviewed by Lynda Waterhouse 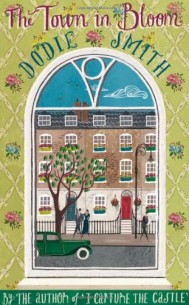 This novel was first published in 1965 and has recently been reissued by Constable and Robinson.  I love collecting and reading out-of-print novels that were written by women from the 1940s, 50s and 60s and am pleased that some like Elizabeth Taylor, Stella Gibbons, Elizabeth Jenkins and Dorothy Whipple are being reissued and rediscovered.
Dodie Smith is best known as the author of 101 Dalmatians and I Capture the Castle.
The Town in Bloom begins in the 1960s with an advertisement placed in The Times personal column:
‘Calling Moll Byblow, the Mouse and the Gazelle. Madam Lily de Luxe reminds you of a long standing luncheon engagement…..Do not fail. This may be the last reunion.’
They all turn up apart from the mysterious Zelle. Mouse spots an eccentric old lady knitting outside the window and chases after her. Despite dispapproving of retrospection Mouse finds herself thinking of the past.
We then go back to the 1920s and to eighteen-year-old Mouse’s arrival in where she is determined to become an actress. She takes up residence at The Club - a boarding house for actresses and musicians where she meets Molly and Lilian who are appearing in comedy.
During a thunderstorm whilst sheltering in an empty house they meet the mysterious Zelle who takes them under her wing and lavishes money and food upon them.
Mouse finds works as a secretary at The Crossway Theatre with Miss Lester. There are some wonderful descriptions of theatrical life in the 1920s as well as some marvellous food and drink details. I am a sucker for details about food in novels. This novel is full of descriptions of malty Veda Bread, brown steak and kidney puddings and ham sandwiches from a coffee stall.
Mouse ‘convinces’ herself that she is in love with Rex Crossway. He tries to keep her advances in check by calling her ‘my child’ and with references to age. He does finally succumb whilst they are at a village pageant in .
This relationship could have felt exploitative if it were not for the way that Smith deals with it. Mouse is reflecting on the incident in hindsight and was in control of the seduction:
‘Why should sex, which is part of love, be considered indecent when written about? Well I still feel that. But before starting to write this paragraph I sat for a long time trying out words in my mind - and they didn’t so much sound indecent as embarrassing, ludicrous and above all, unlikely. I quite see why novelists fall back on asterisk.’
She is also more interested in the poetry of the experience. Rex is embarrassed by the situation and does not encourage it. He is also a vain man who casually cheats on his wife. A lot of the characters in the novel behave less than impeccably. There are lies, betrayal and acts of spite amongst the friends. That summer Mouse grows up and becomes aware of the complexities of the lives of her friends.
The final third of the novel deals with the consequences of the events of that summer evening on all the rest of the characters lives.
I enjoyed this novel for its period details of the 1920s and 1960s, its humour and its  cast of interesting female characters.
The Town in Bloom is published by Corsair
ISBN 978-1-780333-301-4

Ooh I love Dodie Smith but have not read this one - must seek it out. Thanks, Lynda.