The hero of Thief! is Ben Button, a boy actor with Lord Bonner's Men. Queen Elizabeth is on the throne, and this must have been an exciting time to be treading the boards in London's theatres. 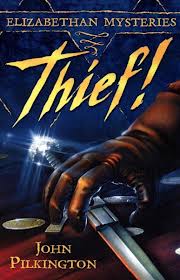 However, in this book Ben is out in the countryside in Hornsey, north of Highgate and south of High Barnet. He's been allowed home for a holiday, and he's looking forward to the welcome he'll receive and to some good country air. But things don't turn out quite as he expects them to. The first shock is that his widowed mother is being courted by a farmer, Dancer May - the only man in the village whom Ben really dislikes.

The second is that his younger brother, Edward, is not inclined to treat him as the prodigal son. It seems to him that Ben is having an easy time of it in London, with his fancy clothes and his 'glamorous' lifestyle. Ben begins to realise that, despite his gift of Eliza the cow (given to him by a rich knight whose life he had saved), his family are finding it hard to make ends meet: it may be that marriage to Dancer seems to be his mother's only chance of lifting her family out of grinding poverty. And then there's Granny, who's suddenly begun to behave very oddly indeed.

All this is worrying enough. But soon, there is news of a series of violent burglaries in the village. Ben has been involved in some investigations in London, and he offers to help his friend Sam Stubbs the miller, who is a rather unwilling Acting Constable. Suspicion falls on a local ne'er-do-well named Daniel Cutter. And then a man is found with his throat cut...

This is a very tightly plotted detective story, with an edge-of-the-seat manhunt at the end. But it's also a thoughtful story about poverty among the rural poor in Tudor times, and about the effect it has on family life. Ben makes a likeable, bright, warm-hearted hero. There are two previous stories in the series, which I haven't read, but which I imagine focus on Ben's life in London with the players. This is an exciting story in its own right, but it would also be a terrific extension to study of the Tudor period - and how nice to have a boy as the main character, and the focus away from Court, as fascinating as that might be!

I think you should add the name of the villain