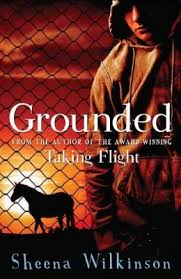 Grounded is a powerful YA story. It is the sequel to Sheena’s first award winning novel, ‘Taking Flight’ but can be read, as I did, as a stand alone story. It gripped me from the first sentence and carried me along through to its shocking ending. On the cover of the book, Keren David aptly describes it ‘Compelling, heartbreaking and truly shocking.’ As such it is not recommended for younger readers.
For days after I had finished reading, images from the story kept coming into my mind, troubling me. I found myself caring about the main characters, Declan and Seaneen, and how their lives would work out. I found myself deeply disturbed by what happens to Cian. This is the mark of good storytelling.
Declan Kelly lives on a tough housing estate in with his mother, who is a recovering addict. He works at a local riding stable and hopes one day to move on to a top show jumping yard and have a horse and a career of his own. At the beginning of the book he is content to ride a friend’s horse, Flight of Fancy, and to continue his relationship with Seaneen.
‘I know that I want to stay here with her nearly as much as I want to go away. But only nearly.’
The only annoyance in his life is the ‘skanky little urban fox’, Cian.  He is a reminder of what Declan was like when he was fifteen. Cian plagues Declan and would steal his ‘future’ (life savings) if given half a chance. Cian gets into trouble with the local drugs dealer. His wraith like presence haunts the story. The scene where he talks to Declan about having had a dog once is understated but packed with poignancy.
In Chapter Two, Declan rides Flight of Fancy in a horse show and wins the championship. He has a job offer to work at a prestigious stable abroad and is on his way. Then his life begins to unravel.
Flight of Fancy is sold and Seaneen has news: she is pregnant. Declan’s life spirals out of control. In a derelict barn he finds some abandoned horses. He rescues a foal and a horse, Folly. This could be a chance for Declan to have his own horse. Will he stuff this up as well?
The story is written with a spare style and a powerful sense of place that reminds me of Meg Rossof’s writing. The story is uncompromising in its depiction of life on the social margins but has a warmth and lightness of touch that transcends an ‘issues’ book.
It deserves to win prizes and to be widely read. I am looking forward to the next instalment!
Grounded is published by Little Island press ISBN 978-1-908195-17-3
www.littleisland.ie