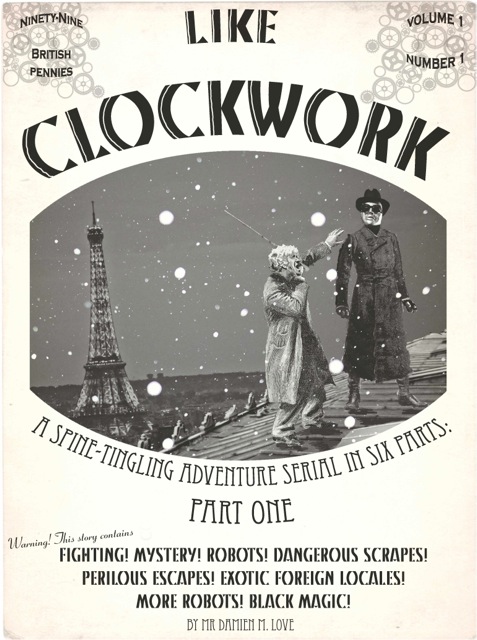 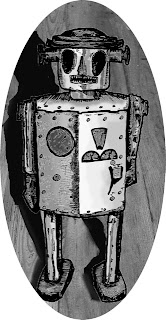 Remember the Saturday morning serials? Remember the sheer excitement of itchy seats filled with hyperactive children; the spilt Kia-Ora that tasted of anything but orange; the terrifying usherettes; the hush as the cinema darkened - and then the absolutely unbearable wait for next week's episode? All right, you're probably younger than I am, but take my word for it, it was the best. I'm not quite old enough to remember waiting for Mr Dickens' next instalment, but the Children's Film Foundation must have come close to the feeling.

The experience is available once again, in its literary incarnation, in the guise of Damien Love's fabulous serial Like Clockwork. The story is to be told in weekly episodes online, downloadable at a pocket-money-friendly 99p (that's Ninety-Nine British Pennies, if you want to get into the spirit, which you will).

It's a timeless adventure in the best sense. Our storyteller takes us first to Prague, where a sinister figure with hat and cane strides through the snow towards a toyshop and its unsuspecting owner. Damien Love brings on the atmosphere right from the first sentence, and he has a magical flair for it. I was right there in the quaint and dusty old shop with its cymbal-clashing monkeys and ventriloquists' dummies – and let me tell you, by the end of the first chapter you realise it's not the best place to be.

It could be the turn of the century, which makes it quirkily surprising to meet our young hero in Chapter Two. Alex is a modern boy who is on the receiving end of very twenty-first century abusive text messages, but who has a passion for collecting old clockwork robots. His latest robot, sent by his grandfather (a wonderful creation himself), is about to plunge him into a world of weird adventure and heart-stopping peril. Very soon, Alex is the target of an assassination attempt by more tiny tin robots – ones with minds of their own.

"But... wait, hang on. I remember now: that robot, it was wet inside. What was that – like, hydraulics?"

So Alex and his eccentric, swashbuckling grandfather must flee to Paris by train in the night, and the adventure begins. Like Clockwork promises "Fighting! Mystery! Robots! Dangerous Scrapes! Perilous Escapes! Exotic Foreign Locales! More Robots! Black Magic!" And judging by Episode One, it delivers them all. I look forward with bated breath to the next five parts.

Now here's a hint. The first episode has been produced in a limited edition newspaper format, illustrated by Paige Stendy and printed on delightfully yellowing newsprint. It includes puzzles, a short horror story and a sci-fi cartoon strip, and that's all on top of a magical story that keeps you turning those crisp and satisfying pages. I have no idea how much it cost to produce, but it's worth those British Pennies (only three hundred and ninety-nine of them!) and I heartily hope the rest of the series will appear, eventually, in the same form. Come to that, a traditional publisher should grab Like Clockwork. Like, quickly.

And so should you. There aren't too many of the limited edition newspapers left, but the serial is up there on Kindle. If you're around nine or older and you like adventure, robots, magic, steampunk, robots, thrills, trains, "generally ill-advised behaviour", and robots – if, in fact, you like clockwork – do yourself a favour and read this. 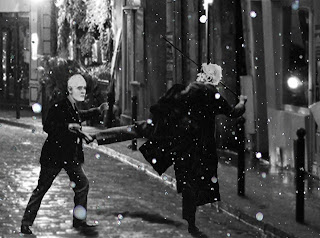 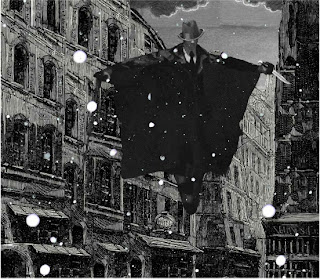 I most heartily concur: 'tis an excellent adventure indeed. I agree too that the serial is overdue a revival. In time to come those first editions will be treasured, so get one now while they're still available. Happy Reading!