It's strange, how fascinated we are by the idea of magic in the shape of wizards, dragons, witches, fairies, elves, pixies, boggarts - the list goes on and on, which shows in itself just how important the enchanted world has been and still is in our imaginations. Cecilia Busby wrote a very interesting post on the appeal of magic over on ABBA not long ago - you can find it here - and of course Kath Langrish's blog, Seven Miles of Steel Thistles, deals predominantly - and fascinatingly - with the same world.

So no matter how many books there already are about wizards - and I'm sure you can think of one or two - there's always room for another; such as Dragonborn, which is the first book in The Flaxfield Quartet. This wizarding world is a fresh one: perhaps more Wizard of Earthsea than Harry Potter, though it's true that  a boarding school does feature later on in the book. 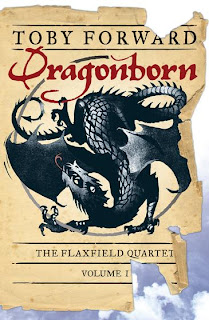 The book begins:
Flaxfield died on a Friday, which was a shame, because he always ate a trout for dinner on Friday and it was his favourite.

Sam said goodbye to him at three o'clock and went off to catch the fish, and when he returned just before five, Flaxfield was dead.

Flaxfield, we later find out, is - or was - a very powerful wizard, and Sam is his apprentice. In this world, the most gifted wizards learn to control their gift by means of a lengthy apprenticeship; it is only the less gifted who go to school. But Sam is only half-way through his apprenticeship, so what is to be done with him? This is the question that Flaxfield's previous apprentices must consider when they appear to say farewell to the master; and at first, they do not appear to be particularly impressed by Sam. He overhears a conversation in which they discuss packing him off to work in the mines, and so he decides that he must make his own way; he must run.

Too late, the wizards realise that he does have power. And they are not the only ones. Far away, a sinister, beetle-eating creature called Ash, imprisoned long ago in a castle by Flaxfield to contain her evil, senses that her old enemy is dead. And she knows that Sam now has the key to her escape...

As he travels through one danger after another, Sam begins to grow into his power. It's just as Cecilia Busby says in the post mentioned above; there are two kinds of wizard: the ones who can learn some skill in magic - and the ones who are innately powerful. Sam, it becomes clear, is one of the latter.

The extract above gives a flavour of the voice used in the book; we see things pretty much through Sam's eyes for much of the time. It's a long book, but the prose is spare, the sentences mostly short. There's a range of intriguing characters, and this fantasy world is very thoroughly imagined, so that it seems we are reading about a place Toby Forward knows, not one he has imagined. The book is beautifully produced by Walker, with occasional really gorgeous and detailed illustrations by Jim Kay.

I read the second book on my Kindle. It's actually a prequel to Dragonborn, slowly revealing the answers to some of the puzzles set in the first book. I'm looking forward to moving on to the next two (though I'm rather disappointed that they aren't yet on Kindle, too!).


Return to REVIEWS HOMEPAGE
Posted by Sue Purkiss at 01:00 Permalink

These are really fab books, and deserve to be far better known than they appear to be ... if you hsven't already come across them, you have a real treat in store!