From the mixed-up files of Mrs. Basil E Frankweiler by E.L. Konigsburg reviewed by Lynda Waterhouse 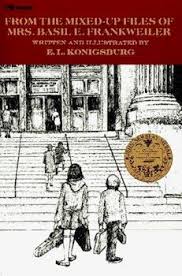 A copy of this book literally fell into my hands whilst I was browsing in a bookshop. The title intrigued me and the opening sentence; Claudia knew that she could never pull off the old -fashioned kind of running away, lured me into the story. As soon as I returned home I read the novel in one sitting. I loved its quirky characters, its hilarious dialogue and surreal situation. It was first published in 1967 and in the following year it won the prestigious Newbery Medal.
Claudia Kincaid and her second youngest brother, Jamie are running away from home so they pack their pyjamas in their violin and trumpet cases and to take up residence in the Metropolitan Museum of Art in New York City. They dodge the guards and decide to spend the night in the rooms of fine French and English furniture. During this adventure something happens to them,
What happened to them was: they became a team, a family of two...Becoming a team didn’t mean the end of their arguments. But it did mean that the arguments became a part of the adventure, became discussions not threats
The novel is narrated by Mrs Basil E Frankweiler who is a cranky, witty and wealthy octogenarian who finds a kindred spirit in Claudia Kincaid. It is she who has sold (she doesn't like donating) the mysterious Angel statue to the museum.
Claudia is determined to unearth the secret of the statue and prove that it is by Michelangelo because if she makes this discovery she will know how to go back home, I, Claudia Kincaid, want to be different when I go back home. Like being a heroine is different.
My edition also contained a delightful afterword instead of a forward because ‘I myself never read forewords until after I have read the book, and then I read them only if I really liked the book and want to know more.’  I read the afterword and I'm sure you will too.

There is a great herbal man called Dr voodoo who can cure Hepatitis B virus and other deadly diseases with the use of natural herbs to cure Hepatitis B virus problems. He is from Africa and he is a great doctor and he can also cure you as well if you are have the problem And other deadly disease and here is email address voodoospelltemple66@gmail.com or Whatsapp +2348140120719 HERPES CURE,CANCER CURE,HIV/AIDS CURE,HPV CURE