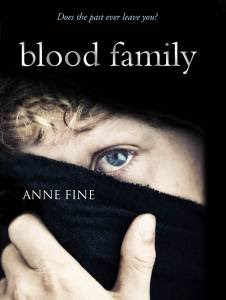 I realize, reading through the review below that I might be taken to be saying: stay away from this book because it's too much in all kinds of ways. It wasn't my intention to say any such thing and indeed it ought to be required reading for anyone who has dealings with adoption services or who wants to understand the difficulties faced by many children. The picture of adoption that comes out of the book is a wonderful one, I think and very sensitively done. What I meant by 'hard to take' is that the book is written so well and at such a finely tuned emotional pitch that it will leave you thinking about it for a long time afterwards and you are not likely to forget it as you are many more trivial works where bloodletting and all kinds of horror are rife. Children who read it will see they are not alone and don't have to be...there are ways of surviving and being helped. Adults who read it will learn much that could prove most useful in their dealings with difficult adolescents....In short, a smashing book and one you should seek out!

Anne Fine has been writing books for children of all ages and for adults for a good many years and her work for readers of every age is marked by its elegance, its humour and its honesty. She also does a good line in spooky, as witness her book of last year, to which this novel is a companion piece, THE DEVIL WALKS. She is also, I have to confess, an old and good friend of mine. Quite a number of my best friends are writers and I'm afraid I can't help it if they're the kind of writer whose books I want to shout about. Am I biased? Well, maybe, but I have no qualms at all in promoting novels I think are good and which many people will enjoy.

"Enjoy" is not perhaps the word to use in the case of this book. It's very hard-hitting and readers of a delicate and easily-upset disposition would be well advised to steer clear of it. Parts of it are difficult to read. Parts of it are so eye-wateringly appalling that I can well imagine the odd person putting the book aside thinking: this is too much for me.

Eddie, four years old, lives with his mother and an abusive man and it's only thanks to the intervention of a nosy and kind neighbour that he is rescued and eventually both fostered and adopted. His foster and adoptive parents are lovely, but by then much damage has been done to Eddie and his mother has been so badly beaten that she can barely talk, much less relate to her son. Eddie, however, as he grows up, has problems of his own. He comes to think that maybe the abusive man who brutalised his mother is his own father and that maybe, as they say, blood is thicker than water and he is in danger of turning into the Beast he so fears and loathes. What he does is take to drink and Fine provides a clear and depressing picture of exactly what this can lead to.

The novel is told in the voices of its protagonists and everyone has a part in the narrative patchwork. This allows Fine to vary the tone and the inflection, and makes the book easier to read as well as moving it along at a cracking pace. You won't be able to put it down, once you begin it. The only person who is never heard is Eddie's mother and that's because she's been beaten to such degree that she can no longer speak or think in any coherent way. Her silence is the saddest thing in the whole novel.

Many people help Eddie along the way and Fine is very good at finding silver linings in the most impenetrable of clouds. There is a happy ending, but prepare to be soundly harrowed on the way there. Teenagers should read this book and so should their parents and carers. When real-life children like Eddie are not as fortunate as he is, our newspapers fill up with tragic stories like that of Daniel Pelka.

Perhaps not a book to recommend as an easy beach read, but one which will stay with you for a long time after you've closed it.

Is this a book for adults, Adele, or teenagers? Sounds fascinating, but to be read when feeling strong!

Nobody should be put off reading 'Blood Family,' nobody. This is a thought-provoking review because interestingly, the novel is not gratuitous or explicit in any way. Far less so than many novels for young adults. Readers' reactions are thus in direct response to the power of the writing and its 'heart'.

The question about whether it is for adults or teenagers is a good one, I'd argue it is nuanced in such a way as to be easily suitable for both with deep questions underpinning it about the nature of adoption, child welfare and attachment.

Thank you, Jake. I shall certainly search it out and read it.

I can see from reading the review again that I must have given the wrong impression of this book. I never meant to warn anyone off reading it..indeed it ought to be required reading. This book is nothing like as violent as many others out there that aren't half as good. There is nothing gratuitous here, but precisely BECAUSE Anne Fine writes so much better than most others, what she writes is more effective and stays with you longer. I will go into the blog if I can later on today or tomorrow and add a paragraph to this effect....

Adele, don't worry - I don't think it sounded as though you were warning anyone off reading it, but when a book is as hard-hitting as this sounds (which makes me *want* to read it, btw!) I think it's right to point that out. You are "warning" but not "warning off".

Having read some of Anne's adult books, and knowing her sharpness of style and mind, "Blood Family" does sound a book that should be read.

I recall "The Tulip Touch" - written for early teens, I think?- as being a book that did not hide the fact that some children have very deep problems and that other children, for various reasons, can get caught up in that unhappy world.

"Warning, not warning off". A good way to put it, Nicola,