THE WEIGHT OF SOULS by Bryony Pearce: reviewed by Gillian Philip 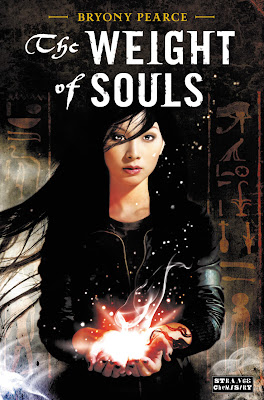 Bryony Pearce does a very good line in unstraightforward heroines. Her debut novel Angel's Fury featured the anything-but-easy Cassie Farrier, a tormented and difficult teen making what she could of a bad deal in life (and not always well); this of course is exactly what a lot of teenagers can relate to even when their lives aren't complicated by family curses, unfortunate bloodlines and tetchy gods. Pearce has pulled off the same success with Taylor Oh, the thoroughly imperfect heroine of The Weight of Souls.

Every teenager knows that there are things in life more important than school, homework or your parents' opinions. Taylor's problem is that having inherited a curse down her mother's bloodline, she's fated to avenge murder victims; this would be stressful enough in itself, but if Taylor ever fails to pass on the Mark (a kind of infectious Black Spot) within a certain time limit, the Darkness that's meant to swallow the murderer will come for her instead. (I've got three deadlines at the moment and I knew how Taylor felt.)

The book is interspersed with entries from The Diary of Oh Fah, the journal of the tomb-raiding ancestor who managed to inflict this fate on his own firstborn and every generation since. Oh Fah was the only survivor of an archaeological expedition that ended badly for everyone. What's more, Oh Fah only got away with it because the god Anubis was in need of a weapon in the mortal world. The curse seems to be all about divine vengeance; but never try to second-guess a god, because there may be mixed motives involved. This is the second time Pearce has made terrific use of mythology (Egyptian this time), in a modern context but without sacrificing any of the ancient horror.

Anyway, Oh Fah is not the most sympathetic character, but he's downright adorable next to some of the men in the story. I've got to say it: I wanted to slap Taylor's father, hard and regularly. Left in a wheelchair by the same accident that killed Taylor's mother – an accident directly related to the family curse – he spends his life bull-headedly denying said curse, telling his daughter she's mentally ill (and so was her mother before her), drawing blood from the girl's bruised arm, and taking everyone's side but hers. It's no wonder Taylor is a snippy verbal match for the bullies who torment her at school; her father's worse. It may be realistic parenting, and he may be showing his love in the only way he knows how, but really. *SLAP*

There comes a point, however, when the bullies do cause Taylor more harm than her father. And it starts when the worst of them, Justin Hargreaves, turns up at school dead. Unintentionally he passes the Mark to Taylor, which causes worse problems than usual... because Justin insists he wasn't murdered. It's at this point that the story spirals into an absolutely nail-biting tale of lies, peer pressure, and Truth Or Dare.

There's a lovely sinister heartbeat running through the book, and it belongs more to the malevolent V Club than it does to the god Anubis. The dares Taylor has to go through at the Club's bidding – because it's her only way of getting to the truth about Justin's death – are heartstopping, and I caught myself reading much farther into the night than I should have. Gripping too was the developing relationship between Taylor and the dead Justin. I do like an antihero, but I liked this one a lot. I grew very fond as well of Hannah, Taylor's long-suffering BF-possibly-not-F (though her ex-friend Pete was another slap-magnet. Really, the men don't come out of this very well).

The Weight Of Souls ends on a satisfying climax, but it hints very strongly at a follow-up. Taylor has tried never to wonder what exactly happens to the souls who are engulfed by the Darkness, but... oh, that would be spoilers. Go and read it. I'll certainly be reading the sequel.*

The Weight of Souls by Bryony Pearce; Strange Chemistry £7.99

Sounds great - will definitely look out for this and her first.

I ignored some mediocre reviews by previous readers of the book, and was glad I did. I really enjoyed it, and hope that there will be a sequel