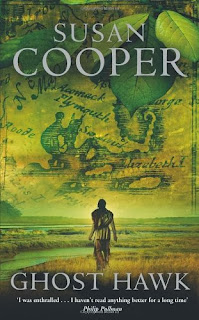 Firstly, a disclaimer: I am an enormous fan of Susan Cooper's previous books (especially The Dark Is Rising sequence, which I had on long-term loan from my library as a child) so I was predisposed to like this book. But sometimes when you have a soft spot for an author's work it can make you disappointed when they write something new and I was fully prepared for this to happen with Susan's latest novel, Ghosthawk.

Set in seventeenth century America, it tells the tale of two boys. One is Little Hawk, an eleven year old  Native American, and the other is John Wakeley, the son of English settlers. At the start of the book, Little Hawk is embarking on a three month winter trial, during which he is expected to survive on little more than his wits. It's a rite of passage; at the end, he will either be a man or he will be dead.

Needless to say, his journey is fraught with tension and danger. Susan Cooper doesn't flinch away from portraying the grim details of his day-to-day existence; Little Hawk has to kill to survive but at no time does the inevitable bloodshed feel gratuitous. At the end of the three months, Little Hawk returns to his village. What he discovers there changes everything.

John Wakeley's story is no less dramatic. He is a boy when we first meet him and he also faces a journey into manhood, but his is an apprenticeship which will last seven years. His friendship with Little Hawk, together with interaction with people like preacher Roger Williams, lead John to develop radical ideas on the fair treatment of the Native Americans. These views are often at odds with those around him and this highlights the ugly truth about the way the English settlers treated the original inhabitants of the land they wanted. Little Hawk and John become inextricably bound to each other - despite their differences, they have much in common. Ultimately, it's these similarities which cost them both dearly.

Ghosthawk is a soaring exploration of prejudice, intolerance and a shameful history, written by a supreme storyteller. I closed this book feeling raw, moved and not a little tearful. It might not always be an easy read but it packs one hell of a punch and the pages simply flew by. I needn't have worried about being disappointed - Susan Cooper left me breathless once again.


Return to REVIEWS HOMEPAGE
Posted by Tamsyn Murray at 06:00 Permalink

Know just what you mean about fearing disappointment, Tanya, and so glad to hear that Susan Coopers newest book left you "breathless once again."