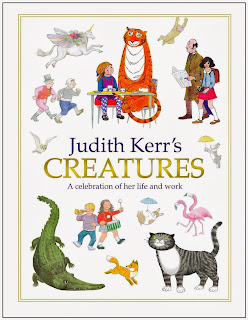 “Once there was a little girl called Sophie, and she was having tea with her mummy in the kitchen...”

So begins Judith’s Kerr’s classic picture book The Tiger Who Came to Tea. Without ever setting out to learn it, I know the whole text off by heart. I doubt that I’m alone. When I went to see Judith Kerr at this year’s Edinburgh International Book Festival, not only was the huge marquee packed to capacity with fans of all ages, but the Chair, Lindsay Fraser, revealed that when she worked in a bookshop, Kerr’s Tiger was the most stolen book. The reason – small children coming into the bookshop would immediately recognise it, and feel that this familiar and much loved story must belong to them.

Judith Kerr is ninety this year. She is the author of many fantastic and classic children’s books – from Mog the Forgetful Cat and its successors, to lightly fictionalised accounts for older children of her childhood as a refugee from Nazi Germany (When Hitler Stole Pink Rabbit and its sequels).

The Festival session marked the publication of Judith Kerr’s Creatures, a memoir of her life produced in glorious hardbook, packed with illustrations and other artwork. Kerr herself was immensely charming and gently funny, as she read a passage which celebrated her late husband, the television writer Nigel Kneale. It’s a cliché that behind every great man lies a great woman: and it was lovely (and moving) to hear this tribute to a husband who always supported his wife’s gifts, from encouraging her to take her first writing job, at the BBC, to providing vital help with the plot of Mog the Forgetful Cat. “Have her catch a burglar,” he suggested, when Judith said she needed an exciting finale for her book – and the rest is history.

There’s lots of fascinating material in the book, from the tale of how her father, theatre critic Alfred Kerr, was on Hitler’s blacklist, and fled Germany after a tip-off in 1933, to be followed by his family, to Judith Kerr’s experiences in war-time London, to her pioneering approach to her first picture books. (Inspired by Dr Seuss, she aimed to use only a limited vocabulary, and to never to have anything in the text that was already clear from the pictures.)

All of this is accompanied by marvellous images, from family photos, to childhood paintings, to the work she produced as an art student – even her designs for wallpaper.

For anyone interested in writing or illustrating children’s books this book is particularly special – and useful. For it includes the manuscript stories, roughs, and complete spreads for many of Judith’s books. It’s wonderful to see Mog, somehow completely herself, even in an early manuscript squiggle. But it is also a rare chance to actually understand how a picture book is constructed - how this creation of words and images really works.

It’s a wonderful book, one to dip into, treasure and keep close by you on the shelf.

Return to REVIEWS HOMEPAGE
Posted by Emma Barnes at 12:38 Permalink

It sounds a lovely book. I had a ticket to see her at Bath, but unfortunately she wasn't well, so it was cancelled. I hope it wasn't serious and that sh's better now.

I love this book, and it is now loaned to my 85 year old mother who is also enjoying it.

Just been to see the fascinating Judith Kerr exhibition at the Seven Stories Story Centre in Newcastle, but I missed seeing this book in the bookshop. Maybe it had already sold out?