The Bone Dragon by Alexia Casale, reviewed by C.J. Busby


The Bone Dragon is an extraordinary book - strong, delicate, magical and matter of fact all at once. It's beautifully written, and will, I'm sure, be deservedly feted by prize committees. It's also gripping, and funny, and very original. 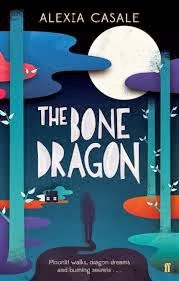 The main protagonist, Evie, is a young teenager who is adopted, and gradually recovering from childhood abuse. At the start of the book she has had a number of shattered ribs removed, and the remnants of one of them is carved into a dragon, to keep by her bedside. The piece of broken rib, symbol of her helplessness against the violence she's suffered, is transformed into a symbol of strength and endurance. But it is soon clear that it is more than just a symbol -  the bone dragon comes to life, becomes a kind of protector spirit and guide. In a number of strange, magical interludes, the dragon takes Evie on a slow journey of healing, their night-time adventures exploring the moonlit fens around her house gradually helping to dissolve some of the anger and the strong defenses that have partially shut Evie off from her new friends and adopted family. Casales makes it clear that the dragon does not exist just in Evie's imagination - there is real mud on her clothes in the morning, and real consequences of some of the dragon's acts: this is magic. But it's a strange, wayward magic that is woven into an otherwise very straightforward narrative of Evie's life and recovery. We learn about her ups and downs with her new family, the process by which they themselves are gradually coming to terms with the death of their son and their brother's wife in a car accident, Evie's troubles at school, her relationship with a teacher who also becomes her counsellor, and the physical complications of her rib operation. Magic and matter-of-fact events mingle, as night follows day, each equally gripping.

It's the counterpoint of these two elements that makes the book so unusual, especially in children's literature, where books are generally either fantasy or 'real-life'. Casales is even more unusual in weaving this thread of magic into a book that deals with the very contemporary and troubling issues of domestic violence and abuse, and particularly in producing a book that deals with those issues obliquely, delicately, without the least bit of sensationalism or easy emotional tugs on the reader. What Evie suffered at the hands of her birth family is never specified, although it can be inferred - she herself, as the narrator, avoids giving it words, cleverly deflecting the probes of her teacher/counsellor, and indeed avoids even thinking about it except in sideways, partial glimpses. We feel the weight of its horror at moments, but always counterbalanced by the warmth, love and understanding Evie is surrounded with from her adopted family. Similarly, the bullying she suffers at school is painful, but always balanced by the support she gets from her two best friends. And ultimately, the anger and fear she still feels about her birth family is balanced by the steadfast, if elliptical, promise of the dragon.

The bone dragon acts as a kind of counterpart to the trauma Evie has suffered - as if the outrageous wrongness of what happened to her has called forth an equally outrageous and irrational magic in response, to rebalance the world. And there is indeed a kind of rebalancing in what the bone dragon achieves - a measure of peace for Evie and a measure of justice in the world. Along the way Casales offers us some wonderful characters and some extremely moving, funny, true-to-life interactions between them - I particularly love Evie's adopted Uncle Ben (everyone should have an Uncle Ben - where can I get one?). I've read reviews that carp slightly about how lovely Evie's adopted family are, as if Casales makes it all too easy. I don't think she does - I think what she shows is just how scarring this kind of experience is for any child, even when they get the best possible second chance, but also, just how much difference such a second chance can make. Personally, I mistrust books that pile on the misery, and one of the things I loved most about this book is precisely that Evie gets the love and security she deserves, and the help she needs, whether from her new family or from the magical bone dragon.

At the end of the book, Casales informs us that she herself, like Evie, has a piece of rib in a pot, and notes that potential critics should beware: it is just waiting to become a dragon. This, I assume, explains the incredibly assured and vivid descriptions she gives of the pain and feeling of shattered ribs. But since this is a nice review, she (hopefully) won't be needing that dragon to protect her!

This sounds very interesting - thanks, Celia, I'll look out for it!