That Burning Summer, by Lydia Syson: reviewed by Sue Purkiss 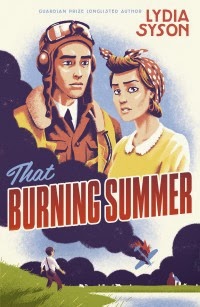 Set during the Battle of Britain, this book deals not with the undoubted heroism of the Few - the pilots and crew of the RAF - but with those who, for one reason or another, came to to the decision that they could not take an active part in fighting the war.

Sixteen year old Peggy's father, a conscientious objector, is one of these. he has been interned, and Peggy, her younger brother Ernest and her mother have come to live with Aunt Myra in an isolated farmhouse in Romney Marsh.

Ernest, a serious, thoughtful boy, is desperately anxious about what will happen if the Germans invade. Peggy is determinedly keeping her spirits up, in the face of the obvious disapproval of people in the village of her father's principled but unpopular stance, and despite Ernest's constant anxiety and need for reassurance.

Then a plane crashes into the marsh. Its pilot is Henryk, a young Polish airman who has joined the RAF after fleeing Poland after the German invasion in order to continue to fight. (Many Polish aircrew escaped, first to France and then to England. They were noted for their daring and bravery - but at the end of the war, Poland was shamefully betrayed, and the Polish aircrew were not acknowledged in the victory celebrations for fear of antagonising Stalin.) Henryk has been through a harrowing time: traumatised, he decides he can no longer continue to fight, and he goes into hiding. But when he approaches the farm one for food, he runs into Peggy. Drawn to him, she finds herself helping him. Should she be aiding a deserter? And should she be pressuring Ernest to do the same? There are difficult decisions to be made for all of them.

The novel explores unusual territory for a book about the Second World War. Pilots who could no longer cope with what they were required to do could be accused of LMF - lack of moral fibre -and ignominiously treated - or if they deserted, they would be court-martialled. And yet they were under almost unbearable pressure; that summer, they pretty much alone stood between Britain and defeat. (A few years later, my uncle, a boy of 19, had agreed to do a sortie for a friend - he had done his required number of flights and should have been on leave. He confided to my mother the night he left home to go back to base that he was afraid; he didn't want to go, he had a bad feeling about this trip. He went, and was killed - lost over Germany.)

And there's Ernest: From this end of the war, we know the outcome - we know that Hitler never did invade. It's so easy to forget that at the time, invasion was a real and terrifying threat.

But as well as all this, That Burning Summer is a tender coming of age and love story. It's excellent - do read it!

This sounds perfect for me. I am also putting it on my wish list.