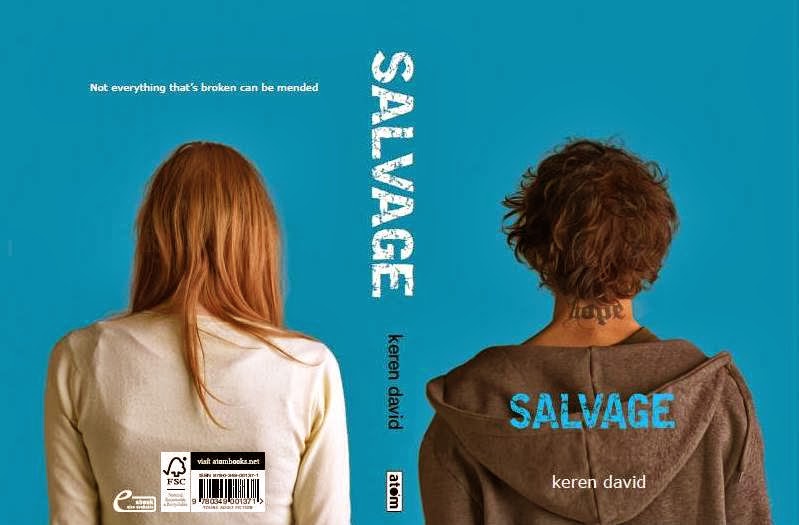 Salvage comes with an alarming tagline: Not everything that’s broken can be mended. Maybe that’s what gave me a mounting sense of dread as the paths of Cass and Aidan and their bewilderingly extended families converged. Not that the tagline is the only arresting thing on the very striking cover: there’s the tattoo on the back of Aidan’s neck, the single word Hope. It’s an ineradicable symbol that begins, at one point in the story, to look like a terrible joke.

Cass and Aidan are sister and brother, separated not at birth but when they were four and six respectively. She has no memory of her birth family; he remembers too much. They’ve had upbringings as different from one another as it’s possible to imagine: she’s now the high-achieving, Oxford-bound daughter of an MP, he’s the product of a care system that has failed him – and a product is what he seems to feel like, as much as the damaged goods on sale at the salvage shop where he works. By a chance of fate and Facebook the siblings find one another, twelve years after they were separated, and arrange a meeting that will have desperately frightening consequences for them and everyone around them.

Two voices tell the story, and they’re masterfully done. Aidan is one of those characters who could so easily lose the reader’s sympathy, but Keren David has previous when it comes to damaged young men (see When I Was Joe and its sequels) and she unfolds Aidan’s complex, terrible story with subtlety and grace. She has said in this interview that she found Cass harder to write, because the girl has so little self-awareness. Is there anything more frustrating than a character so pathologically self-contained she won’t even talk to her author? (I speak from some experience, *cough*.) Well, however David managed it in the end, it works beautifully. Cass might do her damnedest to alienate the reader, but in the end she’s too human to succeed. By the halfway point I wanted the best of everything for them both, and there are no guarantees they’ll get it.

It’s not unknown for nuanced main characters to be let down by a touch of cardboard in the supporting cast. No worries here. It’s been a long time since I’ve read a book where I can picture the characters so clearly, and hear their voices. For me that doesn’t come with physical description, but by that mystical process where they’re just there, suddenly, in the movie in your head. I’d single out Will and Ben as particular delights; Will’s relationship with Cass is lovely. (Cass’s father, by the way, looks like Rupert Graves. Take my word for it.) I confess, I had a tremor of doubt in the opening pages, which bring us a situation that’s almost a cliche of our times. Uh-oh, I thought: plot thread, please don’t play out like I fear you will … Oh, silly me. I shouldn’t have worried. Of course Keren David doesn’t develop a cliched situation in a cliched way.

Not everything that’s broken can be mended. True. But I’m not going to give the slightest spoilers about what does and doesn’t get fixed in this story. If you want to know – and you will – go on, read it.