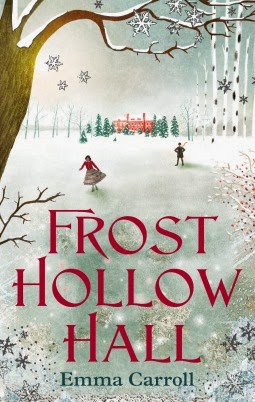 As anyone who has read my Afterlife series will know, I'm a sucker for a ghost story. I have a particular soft spot for Victorian ghost stories (M R James, Edgar Allen Poe and Wilkie Collins are favourites). So when I heard about Frost Hollow Hall by Emma Carroll, it ticked all my Fabulous Gothic Read boxes.

When Tilly Higgins and Will Potter sneak into the grounds of the forbidding Frost Hollow Hall to skate on the frozen lake, they have no idea what misery they are about to unleash. Frost Hollow Hall hasn't been a cheery place since the death of young Kit Barrington, ten years earlier, and after Tilly encounters a mysterious golden-haired boy at the lake, things at the hall get worse. China dishes leap from the kitchen tables, the servants are twitchy and some of them are too terrified to sleep. Desperate to find out more about the stranger she met, Tilly takes a job at the hall and soon finds herself embroiled in a nightmarish mystery. Why must the fire in the front bedroom always be kept lit? Whose are the footsteps that haunt the attic rooms in the night? And what is the secret hidden within the housekeeper's notebooks?

I adored this book from start to finish. Tilly was a very well-drawn character who I sympathised with immediately and I really felt for her as the outsider in her family. Will Potter, Tilly's partner in crime, was equally likeable. But it's when Tilly goes to Frost Hollow Hall that the story really get into its stride and the ghostly goings on had me gripped. I found it to be a very quick read but that's partly because I was loathe to put it down and really wanted to know what happened next. The setting of the hall and surrounding village is deliciously spooky and was the perfect backdrop the creepiness of the plot. This book has everything - an action-filled story, excellent gutsy protagonists and a brilliant supporting cast of bereaved parents, a sinister gamekeeper and a cold, distant housekeeper. As Rhian Ivory said on Twitter, the BBC needs to hurry up and adapt this one, because I can totally see it on TV at Christmas.

I did have some trouble deciding on an age range for this book - I initially thought it was for 9-12s but my opinion changed as I read and I decided Frost Hollow Hall would suit the lower end of YA best - 12-15, probably. It's a romping, squeak-inducing ride with what is easily one of my favourite covers of the year and I heartily recommend it to everyone.

You might enjoy my Ghost tale for Children's Book Day, THE SHEETED DEAD

I was actually lucky enough to get my Frost Hollow Hall book signed by Emma Carroll herself.