WHERE THE POPPIES NOW GROW by Hilary Robinson and Martin Impey. Review by Penny Dolan. 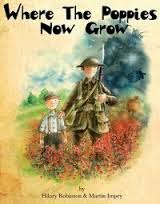 This year we are, in a variety of ways, commemorating the outbreak of the 1914-18 Great War.

It is a topic that has led to reports of spats between historians and Michael Gove, as well as Jeremy Paxman’s comments about young people being taught about the war only through the poetry of the period, which seem to have annoyed both English and history
teachers.


Although Odeon Cinemas are offering the Morpurgo’s “Warhorse” ntlive production, and the novel has shot to fame and film, teachers involved with the Key Stage One “picture book” age may also want to be involved in the significant year.

Where can they find a book to fit this sombre anniversary? Maybe with this title?

Schools – and possibly families - will surely welcome “Where the Poppies Now Grow”, a book inspired by the family histories of both writer and illustrator. 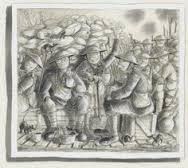 This rhyming text has been written by Hilary Robinson. Hilary uses the familiar “This is the house that Jack built” pattern, which makes the text simple enough for use in school or similar assemblies:


“This is Ben and his best friend Ray


Who are two of the children that like to play


Out in the field where the poppies now grow.”


As the rhyme grows,  the book tells how the two childhood friends, Ben and Ray are eventually forced to join up and share the terrible experiences of the trenches together. It is clear from the mood and detail of the pictures that this is a terrible event, even though the two pals do at last return home.


The text is sympathetically developed through Martin Impey’s powerful illustrations of both friendship and war, using a colour palette that is totally fitting for its sombre purpose.

“Where the Poppies Now Grow” is published by Strauss House Productions.

Return to REVIEWS HOMEPAGE
Posted by Penny Dolan at 20:41 Permalink

I got carried away with my googling, so must mention that the final Martin Impey illustration shown here comes from his work on Michael Morpurgo's "Warhorse" (OUP). Such a fine illustrator!