I thoroughly enjoyed Cracks, although it's not the best of titles for a sentence like that - actually, it's hard to think of a sentence with the title in that wouldn't draw a snigger from several of the teenage protagonists of this book. That aside, it's a rip-roaring adventure that will appeal to many of the readers who devoured The Hunger Games, and reminded me of some of the futuristic thrillers I read as a child by Peter Dickinson, John Christopher, or Robert Westall. Essentially, it's the revolutionary underground against the evil system, but there is scope in that general area for all sorts of interesting things to happen, and Green adds her own inventive take, with some memorable characters and a good deal of exactly the right kind of nail-biting tension and multiplication of layers of plot which need to be uncovered. 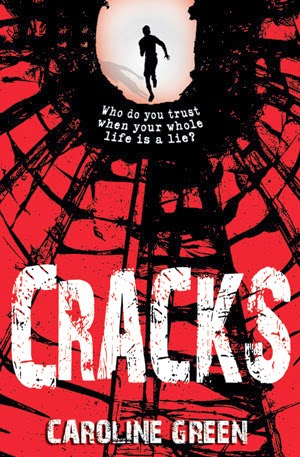 In the first part of the book, we meet Cal, who appears to be an average teenage boy, stuck with a rather nasty stepfather and older stepbrother and a mother who's turning a blind eye to the bullying going on in the family. But from the first sentence we are aware that all is not as it seems: Cal sees a crack running across the ceiling of the school toilet which, when he runs and calls for help, has disappeared. More cracks appear and disappear, he hears strange voices, saying things like, "He's waking up. We need to increased the dose", and sudden stoppages or slippages in time. Despite these clues, it's actually quite a shock when Cal "wakes up" and we discover where he really is.

I don't want to give too much away, because one of the joys of this book is that, along with Cal himself, you have to piece together what's going on from little bits of information or disinformation, and often Cal is forced to reassess things he'd previously thought he had nailed. But essentially, from the point he wakes up, Cal is fighting to find and regain his lost identity, as well as to avoid the establishment scientists who took it away in the first place. Along the way he makes contact with some other lost souls, and meets a girl, Kyla.

The future as painted by Green is recognisably extrapolated from our present - more terrorism, more control, more marginalisation of the poor or non-white. It therefore asks teenage readers to think quite hard about the possible end results of the casual racism, anti-immigration and fears of terrorism we are constantly showered with by the current government and press. White teenager Cal, by way of contrast, associates his warmest memories with an Asian family who ran the local shop in his home-town, and the girl he falls for, Kyla, is black - his growing feelings for her are tenderly drawn, as is his friendship with her best mate, also black, Jax.

I read the book in a little under a day, and it was perfect for that fast-paced, can't put it down, plot-driven story that is sometimes just exactly what you want. Green has recently published a sequel to Cracks, which continues the story, but focuses on Kyla, called  Fragments - I will definitely be looking out for that one, too!