And so a gallant band was formed to bring about the downfall of the rich uncaring few. They were the Wild Wood volunteers and theirs is a saga of poverty and desperation, loyalty and treachery, strange love and great despair.
This is a new edition of a novel first published in 1981. Jan Needle states that he was "in a dosshouse in Dewsbury" talking about Kenneth Grahame's Wind in the Willows, when the idea for Wild Wood first came to him. Leaving aside (for the moment) the question what sort of person spends his time in a dosshouse talking about Ratty and Mole and their furry chums, one can't help wondering what sort of book will have emerged from this unlikely spot.
"It occurred to me," continues Needle, "that Mr Toad and his chums from the River Bank didn't know that they were born. Mr Toad lived in a glorious mansion from which he bought and abandoned executive toys on the merest whim. The servants who existed to service his desires were not even mentioned. They were invisible, taken for granted, as indeed were Mr Rat's." So would this new, alternative version be an angry, revolutionary book or a heart rending lament for the dispossessed? By 1981 Needle had already written Albeson and the Germans (abuse and vandalism), My Mate Shofiq (racism) A Fine Boy for the Killing (a lower deck subversion of the Hornblower tradition) and he would soon be writing scripts for the TV series Grange Hill -- epitome of mid-80s gritty.

Wild Wood works well as political satire -- there's anger at the exploitation and betrayal of the working classes in their attempt to overthrow "the biggest Banker of them all", as Needle describes the plutocrat Toad. Revolution is tried -- and fails.  "There was peace all right but there was something else too. Regret's the nearest to it I can think of.." The mood at the end of the story is melancholic. Yet the words that sprang most regularly from earlier reviewers' pens were words like "joyful",  "exuberant", "truly comic". Wild Wood was published as children's fiction. 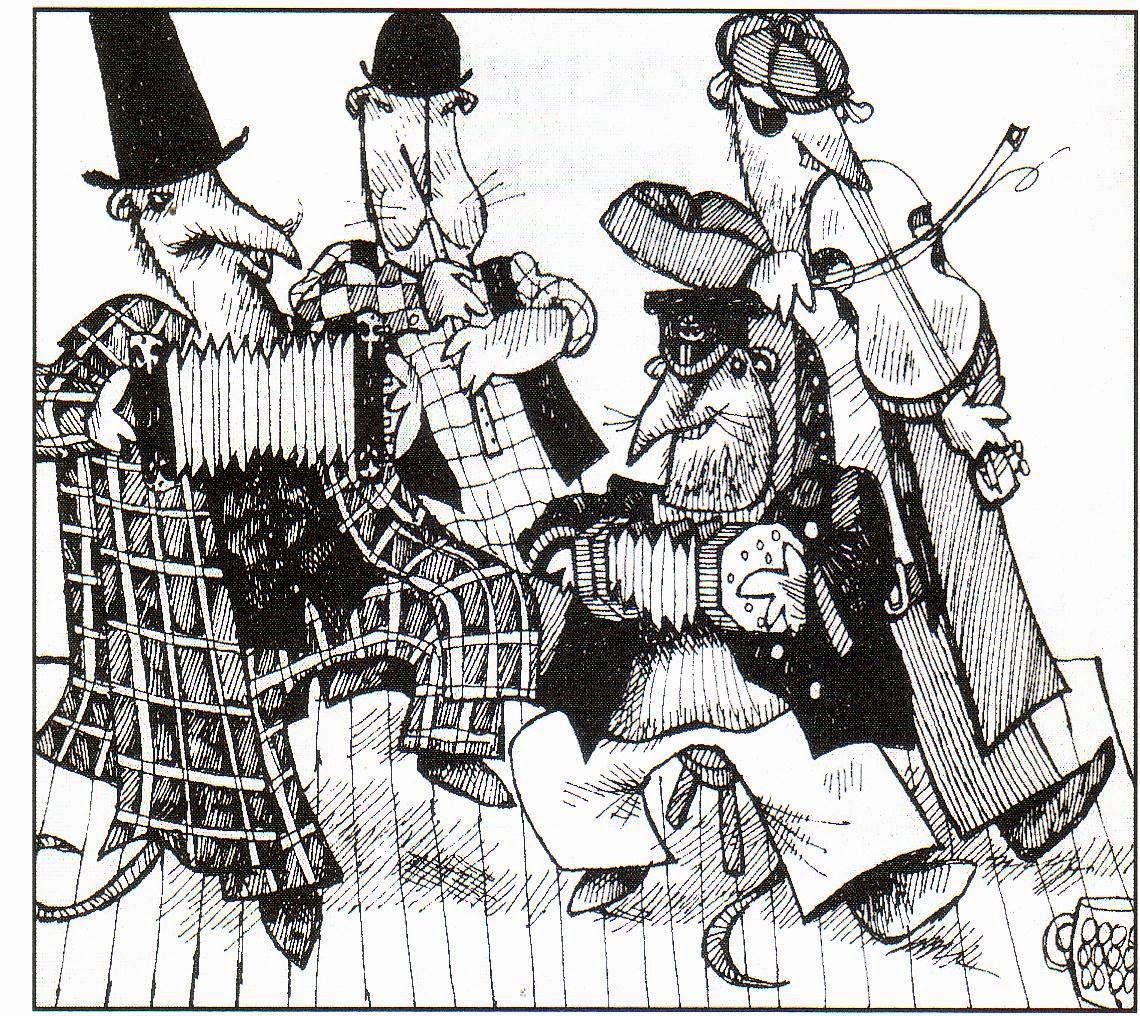 Baxter is the oldest of six young ferrets and the sole support of his family and their widowed mother. He is conscientious and anxious: his life is hard but once a year comes Brewday when his mother makes her famous barley wine. Then there is joyfulness in the Wild Wood when long pink tongues are submerged, lips are smacked and the country band strikes up. Dour Harrison Ferret, for example, changes completely when he puts his penny whistle between his lips "His scowly face cleared like a summer sky after a shower, his shoulders swayed from side to side and his tail switched like a metronome." Kenneth Grahame's characters take a backseat in Wild Wood -- they are, after all, the Enemy. Instead Needle offers a wonderfully individualised array of proletarians -- from the grim revolutionary Boddington Stoat to the champagne socialist O.B. Weasel.

The outstanding creation -- and the source of the true comedy of Wild Wood is its protagonist, Baxter Ferret. Baxter, in his mother's words is "as dim as a dirty lampwick". He's humble, credulous, good-hearted, hard-working and a budding craftsman. Baxter, in his innocence, makes the book accessible for child readers and he may lead adults  to wonder whether this story was finally comedy or tragedy. Despite improved material conditions at the end of the story, Baxter is haunted by his memories of Toad and his uneasy feeling that there was something not quite right about the last days of Brotherhood Hall. "Regret's the nearest I can think of but I'm probably wrong. I never did understand it all. Not so's you'd notice."

Despite its oppositional politics and perception of social injustice, Wild Wood doesn't spoil Wind in the Willows. It's not a pastiche, it's a commentary, it's affectionate and respectful. After all, if Wind in the Willows was capable of enlivening a doss house in Dewsbury, Wild Wood can quite safely be enjoyed thoughout the length and breadth of Middle England.

Well done to Golden Duck for re-publishing what sounds like Jan's currently relevant "Wild Wood". Must get a copy!.

At the risk of blowing my cover, I must point out that the conversation in the dosshouse took place between me and the young woman to whom (along with our two as then undreamed of sons) the book is dedicated. It was a wonderful weekend!

Sounds brilliant! Will have to get a copy - can't believe I've never come across it before! Thanks, Julia.

Yes Jan - I feel a bit of biographical profiling may be in order ... And, thanks Penny and Cecilia for your enthusiasm

I read this several years ago, and remember how much I enjoyed it - brilliant book.

On January 1st, 2015 I decided to reread The Wind in the Willows sixty years after first having it read in class at school and then reading it myself. Later, and by chance I decided to see if any books with the work of William Rushton were available on ebay. What a joy to find Wild Wood. It compliments 'The Willows' wonderfully, and it was published to encourage children to read!

What a nice thing to find in my inbox, out of the blue. thanks indeed.

Need To Increase Your ClickBank Commissions And Traffic?