The House in the Floods by Norah Pulling, review by Lynda Waterhouse 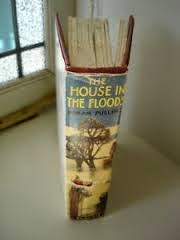 I have been familiar with this novel all my life. Until a few weeks ago it lived on a bookshelf in next to The Girls of Gwynfa, Keeper of the Bees and Dimsie. They are part of a collection of Mum’s Sunday School prize books. The House in the Floods is one of her favourite books.
I hadn’t read it for at least thirty years but was drawn to it again as the storms and heavy rain hit . The story is about three schoolgirls who get trapped in a flooded house on the River Thames. Joan, Rosemary and Dinah are left behind in quarantine when their boarding school breaks up for Christmas. At the last minute they are allowed home and are given telegrams to post to inform their parents.
They don’t send the telegrams and decide to go and look at the flood. Dinah’s school hat blows into the river and Joan decides that ‘this is a chance that only comes once in a lifetime’ and they borrow a boat and set out on an adventure. The boat sinks and they have to use Joan’s penknife to break into a house. They search the house to find food and warm clothes. Joan justifies this by saying, ‘We can’t stop to think too much about everything being other people’s possessions, it seems to me. It’s a case of our being in a hole; and necessity like ours excuses almost anything.’
As a child reading this story I particularly loved the sections where they search the house and hunker down. The girls are brave and practical. They find a tin of cake and some apples in the attic and rescue a kitten from drowning. There are, of course, no adults. As an adult I found this section about children trying to define their world the most satisfying.
Joan mentions her father once as she recalls how he as a young man ‘had often to get up in the middle of the night and do things in the Great War, in the most uncomfortable circumstances… Youth and not having a light were neither of them excuses for being unenterprising.’
They are joined by two other schoolgirls, Isobel and Anne (from the rival boarding school), and they have to decide who will be in charge and maintain order and they all learn to trust each other and become friends.
Yesterday I looked again at the dedication and the date inside the book - 2nd January 1943. Mum was 10 years old at this point and living through a war when she first encountered and became so attached to this story. She had not been evacuated and was living in a part of that was being bombed.
I began to see more clearly why this story might have been both a welcome escape into a world of controlled danger (the floods are never made to feel life threatening) and also to reflect the experience of food shortages, make-do-and-mend and the loss of homes and possessions. Does anyone have any information about the author, Norah Pulling? I would love to know more about her.

I haven't heard of Norah Pulling, but what a name! Nor had I come across this book, but I recognise the type of book, and know that I would have loved it as a child.