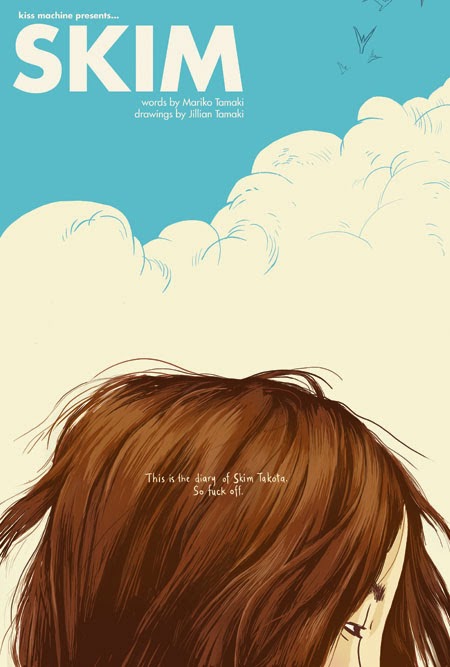 This is a graphic novel based around the diary of sixteen year old goth girl and trainee witch Kimberley Kaiko Cameron aka Skim. At the beginning of the story she has broken her arm. She tells her best friend that she broke it falling off her bike but in reality she ‘tripped on altar getting out of bed and fell on Mum’s candelabra.’
Her parents’ marriage has broken down and her friendship with Lisa is becoming fractured. Popular girl Katie Matthew’s is dumped by her boyfriend and appears with a black broken heart drawn on her hands. There is a hilarious scene in the book where Lisa and Skim attend a coven which turns out to be an AA meeting.
Then Katie’s ex –boyfriend commits suicide and this changes everything at school. Skim is targeted by Miss Hornet, the school counsellor who says ‘students who are members of the ‘’gothic’’ culture are very fragile,’ yet it is Katie who falls off a roof and breaks both her arms.
At the same moment as the suicide Skim falls in love with her drama teacher. Her friendship with Lisa breaks down. Skim is in emotional freefall with no one to talk to. A friendship from an unexpected source brings her joy. There is only one drawing of Skim laughing which is a powerful contrast to how she is portrayed in the rest of the novel.
This novel captures the humour and intensity of Skim’s life and how it is possible to turn a corner in life.
Published by Walker Books
ISBN 978-1-4063-2136-4