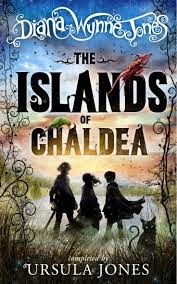 We’ll never know how it should have ended. At least, we’ll never know how it would have ended, had Diana Wynne Jones not died before completing her last novel. We don’t even know where she stopped writing, because the book doesn’t tell us; we only know that somewhere along the journey, Diana’s sister Ursula took over the story and completed it. When she first read to the end of the existing manuscript: “It was a shock,” says Ursula Jones in her Afterword. “It was like being woken from sleepwalking or nearly running off the edge of a cliff.” But taking as her launch point a clue she spotted in the manuscript, and with her understanding of her sister’s style and writing process, Ursula caught the apprentice Wise Woman Aileen and her friends before they fell, and carried them along to the end of their adventure.

When we meet Aileen, it’s the morning after her abject failure in her initiation as a Wise Woman, and she’s being comforted by her Aunt Beck, a full-fledged Wise Woman (and one Scots would call a nippy sweetie). She’s not unkind, though (well, not deliberately), and her no-nonsense attitude chivvies Aileen along into both adventure and a discovery of her true abilities.
I have no idea, and neither does anyone other reviewer I’ve read, where Ursula Jones took over the story. To me it was a seamless adventure with everything a reader could wish for in a fantasy: quests, danger, transformations and impossible obstacles; quirky friends and loathsome enemies and plenty of human frailty in between. As Aileen travels from her home in Skarr to the isolated kingdom of Logra - via the islands of Bernica and Gallis - she accumulates the kind of friends that every fantasy heroine should have, not all of them human (the best of them is the magically elusive cat, Plug-Ugly). And of course, just as it should be, the stern wisdom and acerbic guidance of Aunt Beck is lost to Aileen through a wicked spell; it’s down to the failed young Wise Woman to save the day and break the spells that bind not only her aunt, but the whole kingdom of Logra.

It’s never openly stated but the four islands are very much inspired by the four nations of the British Isles, with Skarr loosely based on Scotland, Bernica on Ireland, Gallis on Wales, and Logra on England. The languages, the peoples and even the living emblems of each island are reminiscent of the respective countries; it’s a rather lovely concept in the islands' links that might soon have an elegiac tone.

Even as you read, there’s a sense of sadness that this was Diana Wynne Jones’s last book. But it’s a lovely coda to a wonderful body of work. I’m just glad Ursula Jones seems to have shared such a telepathic empathy with her sister.

I've always felt that it must be most poignant to know you are leaving a book unfinished, so how satisfying to hear of this seamless conclusion. I wonder if the two sisters had discussed the possibility?