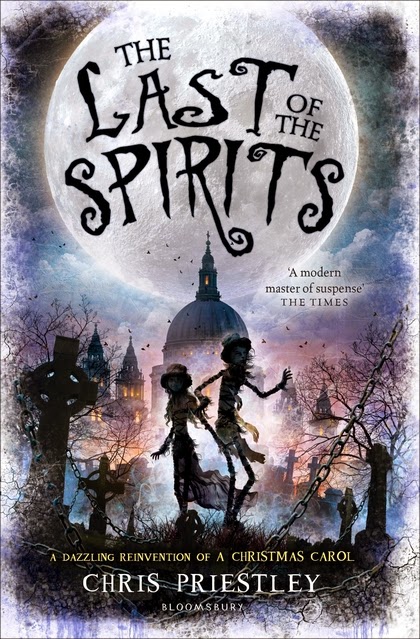 First the blurb....
London is in the icy grip of winter. Sam is freezing and hungry. When he asks a wealthy man, Ebeneezer Scrooge, for money he is rudely refused. Sam is filled with violent rage and vows to kills this selfish man. Later, huddled in a graveyard for warmth, Sam sees the wraithlike figure of a man approaching. The man warns Sam about the terrible future which awaits him if he chooses the path of murder...

Chris Priestley has enviable talent as a writer of Gothic tales and, in November 2014, adds The Last of the Spirits to his growing bookshelf of titles. 'Tis the season of ghosts and icy nights, and so this is a fitting time to bring out this companion to Dickens' Christmas Carol. Companion is exactly what this book is, those expecting a simple retelling will be in for a pleasant surprise as this tale stands solidly beside Christmas Carol, but this is no retelling.

Last of the Spirits follows the misfortune of two homeless children on the icy streets of 19th Century London. The two children, siblings Sam and Lizzie, are caught up in the spectral visitations that plague Scrooge through his tormented Christmas Eve. They are not part of Ebeneezer's story yet, they have their own tale to tell first.

Many writers have tried to snack at the groaning table of Dickens' remarkable works, but Priestley brings something new and satisfying to the feast. In a time of over-long tomes filled with wasted words, this book is refreshingly bright and to the point. No wasted words here. Priestley writes with blade-sharp clarity and this story is completely new, whilst also having a reassuringly familiar quality. It is rather like finding out something new and fascinating about an old family member. Priestley has turned the camera-eye around on the classic tale, thus allowing us to see what else might have been happening at the same time. The story has lots of chilling moments, plenty of ghosts, and you can really feel the deep icy cold of the season as you read it. I recommend a nice cosy room when you read this!

One thing that really jumped out at me (including the startling spirits!) was how well this book reads aloud. Even the best of books sometimes fall down when it comes to reading them aloud, but Last of the Spirits would make an excellent book to share aloud with others. Dickens regularly read Christmas Carol out loud and did so for decades after publication. Some books are written to be heard as well as read, and I can see this taking its place as one of those books brought out every year to share again.


Return to REVIEWS HOMEPAGE
Posted by Dawn McLachlan at 09:30 Permalink

Sounds just the right book for reading now, Dawn, and good "read aloud" writing is such a pleasure to share with children.