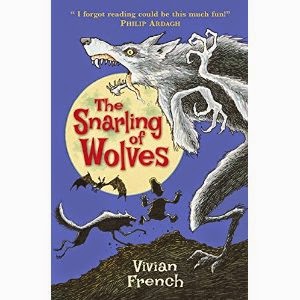 Vivian French deftly uses elements of fairy-tale and myth to create the setting of The Snarling of Wolves; so, for instance, we find a (Less) Enchanted Forest, three Ancient Crones (who, like the Greek Fates, weave a magical web), more princes and princesses than you can shake a broomstick at, werewolves, zombies, a faithful troll - and an intelligence network of bats, whose leader, Marlon, wisecracks away like a character from Raymond Chandler.

The heroine, Gracie Gillypot, is a Trueheart, someone who brings out the good in people. The hero is Prince Marcus, who, unlike most of the other Royals in the Five Kingdoms, is brave, bright and adventurous. Gracie lives outside the Five Kingdoms (which are quite small, as Marcus realises when he looks down on them from the top of a tower), in the Less Enchanted Forest with the afore-mentioned Ancient Crones. The Crones are also responsible for keeping Foyce Undershaft safely away from the public. Foyce is half girl, half werewolf - and all bad. She hates Gracie, whom she blames for her captivity, and concocts a cunning plan to get her own back on the other girl and her beloved Marcus. Her hatred is the engine that sets the plot in motion.

The story moves at a swift pace and is liberally sprinkled with funny dialogue and great characters, as well as a generous scattering of fairy dust. I particularly liked the Ancient Crones (like calling to like, no doubt...) and the less ancient but still pretty elderly Queen Bluebell - but was also strangely drawn to the splendidly wicked Foyce and the conflicted but ultimately principled werewolves. All these are brought visually to life by Ross Collins' splendid illustrations. I wish I could show you some; you can get the idea from the cover with its magnificent werewolf, but you really need to see the full-page line drawings too. The artist clearly had a lot of fun, and he adds greatly to the reader's enjoyment of the book and understanding of the characters and their environment.

All these elements are very fine, but the absolute tour-de-force is the ending. All the characters, and all the different strands of the story, are brought together (by means of exceptionally skillful plotting) in a stunning set piece, where the good triumph, the wicked are overthrown, the fairly average change for the better, the misunderstood receive a sympathetic hearing, and the onlookers - and - readers can only cheer in admiration and delight. I can't tell you any more about it because it would spoil it - but no word of a lie, I haven't admired an ending as much since I read John Irving's A Prayer for Owen Meany.

This is the sixth in the Tales from the Five Kingdoms series, which began with The Robe of Skulls. You could read it as a standalone, but why would you? Better by far to read the whole series. And if anyone from Dreamworks or Disney is reading this (and why wouldn't they be?) - please note that this series would make an amazing animation. Oh, what you couldn't do with the path-with-a-mind-of-its-own, the troll who regularly loses his head, the silly princesses and the sinister Foyce!

I'd say the core audience would be 9-12 year olds. But as with so many children's books, you really don't have to be a child to enjoy it.

(This review first appeared on my own review site, A fool on a hill.)

Lovely review! Always good to hear about books like these, which don't seem to be as well known as the quality of the writing would suggest! Thank you, Fool on a Hill!.

And thank YOU, Penny!

I have just gone and bought it. I want to know what the brilliant twist is!