THE MIDDLE OF NOWHERE, by Geraldine McCaughrean, reviewed by Pauline Francis

I'm very pleased to welcome Pauling Francis to the Awfully Big Reviews team - especially as her first choice is a title by one of my favourite writers. Thank you for joining us, Pauline! 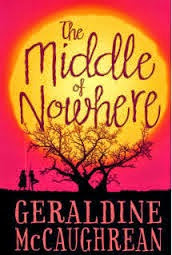 I’ve always wanted to fly across the Australian outback – but flying isn’t my thing – so this Carnegie short-listed novel, set on an outback telegraph station, caught my imagination straight away.

This is a story about a young girl called Comity who, after a series of terrible events, is determined to protect her father’s reputation – even if it means telling a lie and – worse – watching that lie grow.

Knowing the author’s talent for rich landscapes and high-speed action – and complete with glossary sensibly at the front of the book – I set off on my journey into the great unknown to drink in all that was on offer in a barren, thirsty outback.

Comity lives with her mother and father, Mary and Herbert Pinny at Station Four (the Repeater Station of Kinkindele). Apparently, Repeater Stations were there to make sure that the morse telegraph messages weren’t distorted like Chinese whispers. When the novel opens, Comity’s mother is newly dead from a snake bite and her father has plunged into deep grief. Comity has one friend – Fred – an aboriginal, who has also grown up alongside another culture – the ghans – people from Afghanistan or India whose camel trains were invaluable in the barren outback (although real trains also existed). When the evil Quartz Hogg, a new assistant arrives, with his liking for drink and his determination to make sport of Fred, Comity has to leap into action.

A series of unfortunate events follow: Hogg and other men die after a liquor party; not before chasing Fred for sport and shooting him. Herbert Pinny takes to his bed. Comity sends official messages, and others of her own to keep the world at bay (including her ‘posh’ relatives in Adelaide). She messages that war is about to break out among the ghans and the locals - not realising that three hundred soldiers will be sent to keep peace.

Comity survives a time of horror, utterly loyal to her father, and always determined to keep his good name; but she’s consumed with guilt because she has told a lie.

The words morse and remorse kept buzzing through my head, just like those messages.

Like the best stories, the sadness if lifted by comical characters such as Lulu, the laundress, by Fred’s wonderful sense of humour, and by Comity’s badly spelled letters describing her ‘wonderful’ life to her relatives.

Of course, lies grow, Comity knows that. And everything crashes - along with the army train, hit by a gum tree in a great storm and – like Comity – stranded in the middle of nowhere.

All ends well – with Fred’s help. He didn’t die, although he was badly injured. Herbert Pinny’s reputation is intact and he and Comity stay on at Station Four.

What a roller-coaster of events and emotions in an amazing location. You can smell the heat, the dust and the rain. You can feel Fred’s ancestors around you. You have to admire Comity’s efforts in this classic, child against the world, furiously fast, and funny-sad novel.

The Middle of Nowhere thoroughly deserves its place on the Carnegie short-list.

It sounds like an unusual and very dramatic story - thanks, Pauline!