MY STORY: POMPEII by Sue Reid. Reviewed by Ann Turnbull. 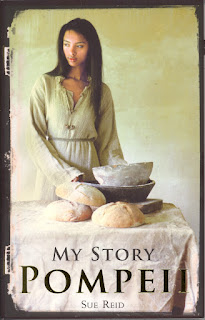 My fascination with Pompeii began at school, at about the age of seven. I have a vivid memory of a film show where we sat on benches in what I now realise was probably a converted air-raid shelter. I was near the front, and was hugely impressed by the sight of red molten lava moving relentlessly down the side of the volcano. The recent British Museum exhibition will have brought this ancient catastrophe to the attention of many more children, and Sue Reid's story - exciting, well-researched and written in a lively diary form - will appeal to anyone eager to know what it would have been like to be there.

This story recreates the last fourteen months of the doomed city through the experience of a young teenage girl, Claudia. Her father gives her a spare roll of papyrus, and Claudia decides to write a diary, starting with the day in August AD 78 when earth tremors shake the city and she encounters a slave boy, a Briton, who is to become a secret friend. Claudia's concerns are typical of a girl of her age: making and breaking friendships with other girls, playing with her brothers, looking after the family's dog and trying to avoid the household tasks that her mother says she must learn if she is to become a proper Roman wife with a house and slaves to manage. Throughout Claudia's story is woven that of Aengus, the British boy, and his search for his sister and for freedom.

Sue Reid portrays well the mix of people in Pompeii. Claudia's father is a freed slave, and this gives him and his family an instinctive sympathy for other slaves. Her mother is an Egyptian, a devotee of the goddess Isis, to whom Claudia dedicates her diary. The city of Pompeii is brought to vigorous life: noisy, smelly, crowded, cosmopolitan - its inhabitants so like ourselves and yet so different with their love of gladiatorial combat and their anxious propitiation of the gods, their sacrifices, curses and good luck charms.

The sense of impending doom makes this a compelling read. The reader fears for the characters and wonders what will happen to them all. Wisely, Sue Reid does not tie up too many ends, but the story finishes in a satisfying way.

At the back there is detailed information about the eruption, how the cities were overwhelmed, the archaeological work, and photographs - including a poignant photo of plaster casts of huddled bodies beside a wall.