The Pebble in my Pocket was a bookseller recommendation and one of my most successful presents this year. I gave it to my five year old grandson who’s not yet a great reader but has a real interest in the natural world and a fabulous memory for facts. 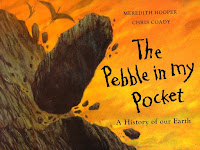 The Pebble in my Pocket begins with the most insignificant object; round and smooth and brown, an ordinary pebble. You might be irritated if you found one in your boot, you might pick up a handful and chuck them in a pond, just to hear the spatter. Would you ever look at it and think I’m holding something that is millions of years old: something that could have been on top of mountains and under the sea, covered with ice and stamped on by mammoths? Here’s something that was thrown up from the deep inside the earth, formed in unimaginable heat. This pebble is older than the oldest fossils; three times as old as the oldest dinosaurs. This pebble has a story and its story is the story of our earth.

Never mind the grandchildren, for people like me who get in a muddle with the number of noughts in the millions and are hopelessly uncertain about the correct ordering of their Silurians and Devonians, the layout of this book is the first of its blessings. Each double page spread takes the story gently forward from a volcanic eruption 480 million years ago to a newly built house today. It’s never boring. Great fun to read aloud and with a real sense of story and occasionally drama.“Under the volcano, melted rock shifts like thick treacle […] The ground shakes. Gas hisses […] Columns of purple ash shoot into the sky.”

Big geological events – an eruption, flooding, an ice age, another ice age – are interspersed with small individual happenings. Once each particular pebble has been formed it’s subject to apparently random events. It may be swept down a river, trodden on by diplodocus, chucked at a rat by Neanderthal boy.
“Every pebble in the world is different from every other pebble. Every pebble has its own story. Pick up a pebble and you are holding a little piece of the history of our planet.”

You could see it as emblematic or simply awe-inspiring. My grandchildren responded in various practical ways. First, naturally, they hurried out of doors to collect pebbles of their own, compare them and wonder at them. Then they pestered their mother to make a volcano with vinegar, sodium bicarbonate and orange food colouring. After which they drew and painted and talked about their pebbles and the next time they were playing on their native Welsh beach they felt a real, knowledgeable thrill at the sight of pudding-stone rock.

I bought another copy immediately with the honest intention of passing it to the other grandchild family but I realise I’m not going to be able to let it go. And now I discover that the same author-illustrator team has previously told the story of water in The Drop in my Drink. It's on order.

The Pebble in my Pocket: a History of our Earth
By Meredith Hooper (illustrated by Chris Coady)
Frances Lincoln Children’s Books (1996)

Return to REVIEWS HOMEPAGE
Posted by julia jones at 00:29 Permalink

This sounds wonderful! Just the sort of thing children would love and learn from. I shall definitely be getting a copy - or maybe two...