The House of Eyes, by Patricia Elliott: reviewed by Sue Purkiss

There are quite a few books about where children turn detective - it's been a popular genre for a long time: would Emil Kastner's Emil and the Detectives be one of the earliest? More recently, Joan Lennon has brought out the Slightly Jones mysteries, and Elen Cadecott the Marsh Road mysteries - both great fun.

Now here's Patricia Elliott with a series set in the early 1900s, and a very determined heroine called Connie Carew. Connie, an orphan, lives with her two aunts, Sylvie and Dorothea. The latter has a very unpleasant husband named Mr Thurston, who wears Macassar oil on his hair and has creaky corsets. (How could he possibly be nice when he commits two such crimes against good taste?) 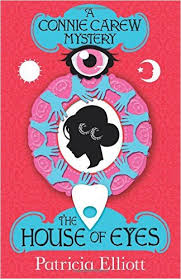 The action kicks off when Connie and her aunts go to a seance. It is well known that the unfortunate Dorothea lost her first husband, Mr Fairbanks, not long after their marriage; and that her two year old daughter, Ida, was kidnapped and has never been seen since. So Dorothea is both shocked and excited when the medium announces that at last, after fifteen years, Ida is coming home - and produces an apparition which purports to be this same Ida.

Soon after this a beautiful girl does indeed appear at the house, declaring that she comes from an orphanage, that she's seeking a job as a maid - and that her name is Ida Brown. Aunt Dorothea is instantly certain that this must be her long-lost daughter - and the gold locket Ida has would seem to bear out this theory. The rest of the household seems to be convinced, but Connie is not so sure.

Connie is intelligent, resourceful and determined. Ida is beautiful, and it's not surprising that Connie is a little jealous of the way all her favourite people quickly become besotted with the newcomer. But she doesn't let this get in the way of her pursuit of the truth. Ida is almost eighteen, and on her birthday, she will inherit a large fortune. Clear-sighted Connie realises that she is the only one who is objective enough to find out the truth - but she doesn't have very much time...

The story is told in a crisp, light fashion - a reflection of Connie's own personality. There is lots of incidental detail about life in Edwardian London: the clothes, the transport, the places they lived in; even the King himself makes an appearance at one point - fortunately for Connie, who is in a tight spot at the time. The other characters are also vivid and well-drawn: eccentric Aunt Sylvie, sad Aunt Dorothea, weedy-but-nice Arthur, handsome-but-caddish Frank, and Ida herself, conflicted, confused and beautiful. There's a nice hook at the end to link into the next story, and it's very good to know that this will not be the only case for the excellent Connie Carew to solve!

Just one thing - I'm sure I'm being dense, but I couldn't quite figure out why the book was called The House of Eyes...?

An Edwardian detective mystery? Sounds like the start of a successful series for Patricia Elliott.