A SONG FOR ELLA GREY reviewed by Pauline Francis.


A Song for Ella Grey by David Almond, reviewed by Pauline Francis. 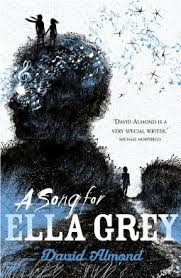 There was an interesting flurry of letters in the Guardian recently and cover on Radio 4 of the comments by Lynne Reid Banks on this novel, which won the Guardian Children’s Fiction Prize in 2015. Lynne Reid Banks bought the book for her twelve year old grandson, feeling that “she could trust a David Almond book and a children’s fiction prize”, got home and was shocked to find lesbian love and girls in bed on the first page.

I felt sorry for Lynne (although I’m sure she doesn’t need my pity) because she made herself seem out of touch, when she really meant that a children’s fiction prize should be that – for children - and the readers of this book wouldn’t be children (or would they?). The Carnegie prize has a similar problem. Schools often have had to send out letters to parents to ask permission for some books to be shadowed. Do we need to split children’s fiction awards into age groups?

A Song for Ella Grey is a modern retelling of the Orpheus and Eurydice legend: Orpheus and Eurydice were blissfully married until Eurydice was bitten by a snake and died. Protected by the gods, Orpheus descended into the Underworld (Hades) to find his wife. He charmed everyone with his lyre music and song, and she was allowed to leave with Orpheus on condition that he did not look at her.

This novel has a wonderful sense of place, set in Almond’s own back yard – Northumberland – but he cleverly reminds us of the tale’s Greek origins as his group of teenagers eat and drink and fall in love on the beach, pretending that they are on holiday in Greece.

Ella Grey and Orpheus fall in love. It is a clever device to use Ella Grey’s friend, Claire, as the narrator because she sees their love story unfold from the inside.  She tells Ella about Orpheus. She watches Ella fall in love with him – and this love is further complicated because Claire is in love with Ella. I liked the fact that these aren’t troublesome teenagers. It’s so refreshing to read about young people who take their school work and their futures as seriously as falling in love.

The love story is joyful and uplifting – and so intense that I felt the characters were real and I wanted to warn them not to fall in love. Of course the intensity is increased because the reader knows that their love is doomed (well, some of them will know).

The second half of the story – Ella’s death and Orpheus’ descent into the Underworld is harrowing and original. Claire puts on a masque and speaks through it as Orpheus.
The pages are black, with some hand-written sentences spoken by its unknown dwellers, who continually mock Orpheus: “Ye lost yer love! Oh poor thing!”

Orpheus’ song for Ella Grey is unforgettable. He sings it to the guardian of the Underworld itself, begging to be allowed to take his beloved Ella back to the light – which he does. Their love and closeness during this journey are almost unbearable.

The, suddenly, one desperate sentence spoken by Claire says it all: “She was almost here again. But Orpheus looked back. Thud.”

The prose of this book is lyrical and intense. It is like the very music that makes Ella fall in love with Orpheus before she even sees him. Reading this novel is like listening to a love song.

However, I’d like to know how this novel might be enjoyed by a reader who does not know the legend behind it. It would be like reading Romeo and Juliet without knowing the ending. It shouldn’t make any difference, should it?

A Song for Ella Grey is an unforgettable read, whatever the answer.