THE GIRL IN THE BLUE COAT by MONICA HESSE, reviewed by Pauline Francis

It was the prologue that made me decide to review this recently published novel.
It begins: “A long time before Bas died, we had a pretend argument about whose fault it was that he’d fallen in love with me.” 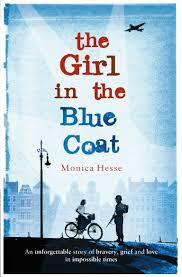 The story opens in occupied Holland in 1943, in Amsterdam. Clever, because I immediately think of Anne Frank and that steep, claustrophobic climb to her hidden attic. So I fear for Hanneke, the protagonist, Hanneke is a finder. She used to find coffee and chocolate. Now she finds and sells extra potatoes and meat to the wealthy people of Amsterdam. One day, she’s asked to find a person.
‘‘The missing girl is Jewish,’ Mrs Janssen says. ‘ I want you to find her before the Nazis do.’

Hanneke can’t refuse because of her own grief about Bas, who died as the Germans invaded.

Now I’m ready to read non-stop. ‘Why and how did Bas die? Who is this Jewish girl called Mirjam, who was wearing a blue coat when last seen? And how on earth will Hanneke find her in an occupied city, before she can be transported to a concentration camp - even if she wants to? The tension is heightened by the fact that that almost three quarters of the Jewish population of Holland died during the war, so I know that Mirjam’s chances of survival are slim.

There are ghosts everywhere in Hanneke’s quest: Bas’s ghost as his older, serious and less engaging brother, Ollie, helps Hanneke; the ghosts of the already transported Jews; the ghost of a once happy city. The rare flashbacks with Bas are sensitive and tense – the first time I saw Bas; the last time I saw Bas etc.

Then just as I’m settling into the quest (which is condensed into a few days), Hesse presents me with another one. Half-way through the novel, Hanneke says: ‘I’m to blame for Bas’s death. I only got him killed.’ I’m on full alert as I race to the end.

There are so many layers to this book: history, mystery, war, duty, danger, pretending in order to stay safe, morality in war. Ollie is a member of the resistance, but when he questions helping Mirjam. Hanneke quickly asks: ‘Ollie, if the good you’re working so hard for is one that won’t work to rescue a fifteen-year old girl, then is it worth it anyway?’

There are as many twists and turns as the old city centre, but Hesse never leaves her reader behind. The Girl in the Blue Coat a sensitive and tender book that leaves nothing untold about what it’s like to be on the run in an occupied city. Hesse herself calls it “ the story of small betrayals in the middle of a big war.”

The best advice I can give you before you read this book is Hanneke’s own thought on page 299: “Nothing in this war is what it seems.”

I'm hooked! A definite addition to my summer reading list. Thanks for such an enticing review, Pauline.

Reminds me of one of my favourite childhood reads, Ian Serallier's The Silver Sword. Ordering a copy as we speak.

I LIVED IN AMSTERDAM DURING THAT TIME AND STILL HAVE ALL THE MEMORIES OF DANGER LURKING AROUND YOU. I WAS 12 YEARS OLD IN 1943 AND DID THINGS, ONE NEVER HAS TO DO NORMALLY AND INSTILLED A SENSE OF INSTANT TRUST OR NOT WHEN I MEET SOMEONE AND HAS HELPED ME TO DO BUSINESS WITH HONEST PEOPLE BECAUSE OF THAT TIME PERIOD GROWING UP WHILE THE NAZI'S ROUNDED UP PEOPLE AND SENT THEM TO THE CAMPS TO BE KILLED. I SAW A JEWISH FAMILY BEING DRAGGED OUT OF THEIR HIDING PLACE AND WERE LOCATED BY ''LOOSE TONGUES ''.