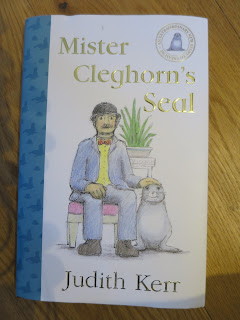 Last year Judith Kerr, now in her nineties, had a very special new book published.  Mister Cleghorn's Seal is a delight.  Handsomely produced on thick cream paper, with gold lettering on the cover, this book is a classy one, and a fun and a moving and a beautiful one.  It isn't a picture book.  It's a story book.  But every spread has wonderful soft pencil drawings to accompany the text.  The stubby nice people who live in this story world along with the big-eyed seal pup are very appealing, and the whole book has the most comfortable feel of a story one smiles one's way through reading.

The hero of this story isn't a child.  He's a recently retired old bachelor who isn't sure what to do with his time now that he has no work.  But, never mind that, Mr Cleghorn wants exactly what a child would want, and does exactly what a child would want to do.  When faced with an orphaned seal pub that's starving, Mr Cleghorn simply takes that seal pup home with him on the train.  He feeds it with a baby bottle, and waters it on his balcony with a watering can, and puts it into his bath. 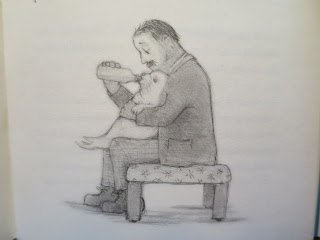 But there's a problem with keeping a seal in a flat where there's a janitor who is keen on the rules, and those rules state that no pets are allowed.  What is Mr C to do?  He considers the nearby zoo, but it isn't good enough.  Then a lady neighbour proves sympathetic ... and I'm sure you can guess how this story manages to end happily after all.  In saving the seal pup, Mr Cleghorn has saved himself.

A post script from author/illustrator Kerr tells how this story actually puts right a sadder true story that has haunted her over for years.  'More than a hundred years ago' her father, as a young man, had saved a real life seal pup, taking it home to his flat in Berlin, feeding it with a baby bottle and watering it with a watering can on his balcony, and putting it into his bath, but that pup died.  The post script doesn't add that the man himself was then hounded from his home by the Nazis.  There's a lot of restrained emotion in this story, and that, along with the beauty of the pictures and the production, makes it moving and memorable whilst also fun.  This one really is and story and book for any age from about four up to anything you like!


Return to REVIEWS HOMEPAGE
Posted by Pippa Goodhart at 00:30 Permalink