RETURN TO THE SECRET GARDEN by Holly Webb, reviewed by Pauline Francis

The Secret Garden, by Frances Hodgson Burnett, first published in 1911. This continuation of the story was published by Scholastic in October, 2015. Although it works well as a stand-alone story, I imagine that most readers will know the original.

Is our expectation as a reader of a sequel high because we know that the original is a classic? I think so. It’s always tricky to write a sequel and Webb wisely chooses her own set of characters to open her story. The reader engages with her characters before we meet some from The Secret Garden. This is important so that children who haven’t read it are not at a disadvantage. 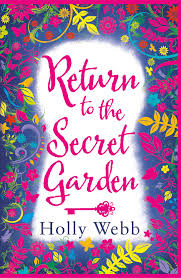 The events of Webb’s story, told from Emmie’s point of view, take place almost thirty years later. She is ten and one of a group of evacuees being sent from their London orphanage just before the declaration of the Second World War. Destination? Misselthwaite Manor in North Yorkshire, the setting of Burnett’s book. When a Mrs Craven comes into the dormitory to see that the children are settled, the link is established. One of the children remembers the plaque in their orphanage, which reads: Founded by a Mr Archibald Craven of Misselthwate Manor in gratitude for the recovery of his son, Colin.

Emmie isn’t happy at all. She feels lonely without her cat, Lucy, especially as she is the only girl of her age in the group. Wandering alone In the huge manor garden, she comes face to face with Jack, a boy of her age, who is Mrs Craven’s son – and later, Mrs Craven herself.

Now I’m ready for a strong link with Mary Lennox, the orphaned child of The Secret Garden, and Webb doesn’t disappoint me. Emmie finds Mary’s dairies, begun in 1910, from which we learn about Mary’s discovery of a secret garden. Emmie finds it too, not the desolate winter garden of Mary’s time, but an end-of-summer garden full of scented roses and lilies.

As the seasons change, there are many happy times: Jack and Emmie become friends; Jack’s father comes on leave from the Air Force, bringing Emmie’s beloved cat from the orphanage; and games of hide and seek in the gardens. This idyll is brought to an end: Mr Craven is killed rescuing soldiers at Dunkirk. Emmie finds Mrs Craven weeping in the secret garden. There’s no tenderness in this scene. The gardener pulls Emmie away, shouting, ‘It’s her place, his and hers, their secret. Leave her alone. Stay out.’

This is the most dramatic part of the story. Emmie is even more desperate and alone. Jack still has his mother. She hasn’t. She only had the garden to make her feel special. It is biblical – chased from paradise, the Garden of Eden. ‘What if I can never go back?’ Emmie whispers.
She has to go back to rescue her cat and comes face to face with Mrs Craven, who says. ‘I stole this garden, Emmie, did you know? I can’t really complain if you do the same, can I?’
Now Emmie understands. Mrs Craven is Mary Lennox. Her husband was Colin, the sick boy who helped her in the garden almost thirty years ago.

Sometimes, as readers, we imagine what young protagonists might be when they grow up. What would Mary Lennox be like? She was a mean and sad orphan, just like Emmie. Yet she has become, thanks to Webb’s skill, a sensitive and caring adult. And now we understand that Emmie’s has the same chance to change.

Return to the Secret Garden is a book about friendship, the effect of war on families – and hope.
The secret garden has worked its magic again.


Return to REVIEWS HOMEPAGE
Posted by Penny Dolan at 09:13 Permalink