A TRIO OF PICTURE BOOKS reviewed by Adèle Geras

The news agenda in the last six weeks has been a cross between a roller-coaster and an earthquake. I have done very little reading because I have been glued either to the television or the radio, watching one ginormous Changing of the Guard. So readers of this blog will forgive me  if I've taken refuge in the three picture books I'm going to discuss below. Whatever happens in the corridors of power, or in what our new Foreign Secretary so powerfully called  "the chancelleries of Europe," (Our Boris is no slouch, language-wise!) and in the rest of the world, little children still need to be read to every night. They need it as much as they need food and the more picture books you read to them when they're small, the better will be their chances of being literate, friendly, sociable, unfussy about their food (Bread and Jam for Frances by Russell Hoban is good for this!) and more able to withstand anything a government can throw at them.

The three I'm highlighting here are all published by Faber, which as everyone knows, is  famous for its poetry list. Now I'm not claiming that Elli Willard is T.S.Eliot, but she's written a book (one of a series) called A Present for Pig and  I can guarantee that any child you read it to will be reciting the rhyming couplets till you are probably heartily sick of them.  I found them delightful. What is more, they tell a story:  Woozy the Wizard, resident of Snottington Sneeze, wants to find a  birthday present for his friend, Pig. In spite of all his magic tricks, nothing seems to be working out, but of course in the end the present appears and it's JUST RIGHT! 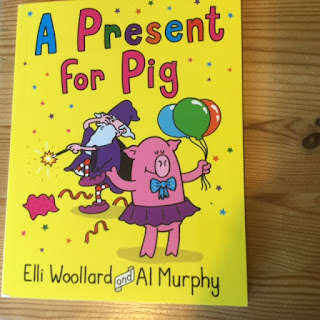 Al Murphy has a loose, casual style that fits perfectly with the verse. This kind of illustration looks as if anyone might do it, but they really, really couldn't. It's perfectly suited to the text which is one of the most important things about picture books. The colours are bright and the whole thing beautifully produced. Altogether, it's a cheery, funny, joyous and enjoyable story which has a satisfying beginning, middle and end. I'm sure children of four and up will love it and I'd be willing to bet that parents all over the country will be muttering lines from it before too long. 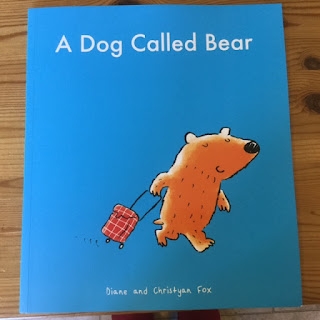 A Dog called Bear is a simple story about love. About compromises, and give and take and searching for the right pet. Lucy wants a dog. No dogs are forthcoming, so she settles for a Bear. Well, why not? The Bear gets fed up with doing doggy things and runs away, and Lucy, in spite of being extremely annoyed by various Bearish habits, like hibernation, is desperately sad when he does. I don't have to tell you that it all ends happily and we are left to assume that they live happily ever after. Well, of course they do!
Both Bear and Lucy (in a very short text) come over as fully rounded creations and the illustration style is cartoonish but still packs in masses of emotion and character. The big pages of this large-format paperback are full of space which is a real treat.  The critics on the back just love it and I think you will too. 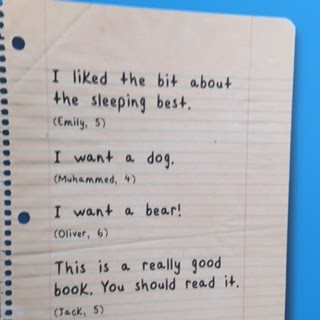 My last choice is a good and appropriate one for Faber to be publishing.  It's a poem by Walter de la Mare, who is probably out of fashion these days but whose work I love. The very  short verse is  called   Summer Evening and Carolina Rabei has expanded it to show a whole series of scenes of life on a farm. It's a simple idea but it works very well and the colour palette the artist has chosen will remind grandparents at least (my generation) of that supreme nursery classic, Rosie's Walk by Pat Hutchins.  The view it gives of a farm in the UK is a very traditional and probably old-fashioned one, but it's none the worse for that. And when your children are reciting Walter de la Mare by heart you will deserve a pat on the back for introducing  them to a great and underrated British poet. 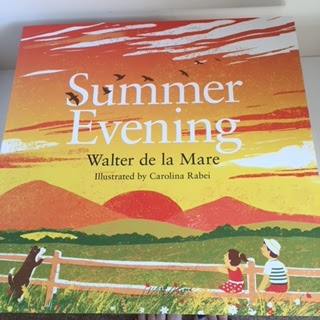 All three books published by Faber in paperback.


Return to REVIEWS HOMEPAGE
Posted by adele at 01:30 Permalink

They look lovely, Adele. A useful reminder that writing something simple isn't to be attempted by a simpleton.

Yes, there are definitely times for books like these. I do like the sound of that Bear book. Don't we all have days that don't quite fit who we really are? Thanks, Adele