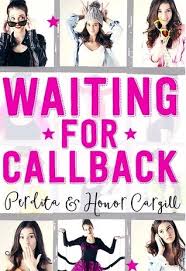 I have to admit, I stole Waiting For Callback from my daughter.  I read it in one sitting and managed to slip it back onto her bedside table without her noticing. She is now glued to it!

Waiting For Callback by Perdita and Honor Cargill is such a fun, warm story, which will have you laughing out loud. It is about Elektra, a fifteen-year-old girl, who imagines Oscar glory to be just around the corner after being discovered by an acting agent. Yet the reality proves very different. For example, her agency isn’t some swanky LA type building but a small room above a dental practice.  Elektra soon learns that there is so much waiting about. And ‘just how many times can you be rejected for the part of ‘Dead girl number three’ without losing hope?’

Perdita and Honor have created a wonderful relatable protagonist in Elektra.  She is funny, articulate and very honest.  We live through her humiliations (of where there are plenty) her joys, and her fears. Even though she’s trying to make it as an actor, she has the same worries that most teenagers have - spots, fallouts with her best friend, annoying parents, school, and crushes…

The supporting cast are well thought out and very entertaining. I particularly like her parents – her mother’s desperation to be part of her daughter’s life, and her father’s loving indifference really shine true. Her crush is swoon worthy, her best friend great fun and her nemesis a perfect mean girl!

There are fabulous little extra details in this book. The emails from her school and her agent are incredibly witty, and I found the quotes from real actors fascinating.

Perdita and Honor have captured teenage life brilliantly, and created a great new character. I can’t wait for the next book so I can laugh even more at Elektra’s exploits.


Return to REVIEWS HOMEPAGE
Posted by Tamsin Cooke at 07:30 Permalink