A LIBRARY OF LEMONS by JO COTTERILL. Reviewed by John Dougherty 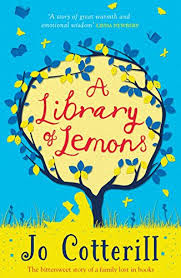 I should start with a declaration of interest: Jo Cotterill is one of my best and dearest friends, and so this review is likely to be a little bit biased. For an accurate rating, I suggest you take the figure I’ll award the book at the end of the review, and half it.
That said, I’d have loved this book no matter who had written it. I warn you, though: when you read it you might need to keep a hanky handy. It’s a very powerful and emotional story, and I found myself shedding proper tears several times.
Calypso, the protagonist, is a strong and likeable character, but there are a lot of things that she doesn’t realise about herself. She’s lonely. She’s a carer. She’s being neglected - both physically and emotionally - by her dad, who is still grief-stricken following the death of her mum five years previously. But things change when unwillingly, accidentally, Calypso makes a friend. Mae is everything that Calypso’s dad is not - warm, in touch with her feelings, genuinely spontaneous, and emotionally present - and as contact with Mae and the rest of her family grows, the protective shell which Calypso has, all unknowingly, built around herself begins to crumble. But still Calypso doesn’t realise how wrong her life has become, until she makes a discovery…
The range of issues covered in the book is enormous - young carers; mental health; emotional disconnection; friendship; bereavement; the list goes on - and in the hands of a less able writer, this could provide us with a catalogue of clichés. But A Library of Lemons is not an ‘issue’ book; it’s a story, a good one, which happens to deal with these issues, but which deals with them so deftly that all we really care about is Calypso’s unfolding: how she uncovers the reality of her broken life, and learns to connect with others, and discovers that the ‘inner strength’ her dad keeps telling her about only matters if you learn to share it. 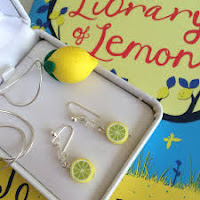 I entirely agree, John, it's a brilliant book, and I'd also give it twelve out of five. Great review too!