THE CURIOUS TALE OF THE LADY CARABOO by Catherine Johnson. Reviewed by Ann Turnbull 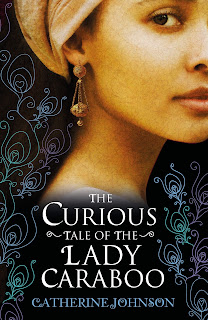 "Doesn't she understand her lot?" wonders young Fred Worrall, when faced with a frightened and reluctant young prostitute - before daydreaming about his own 'lot': travel, university, work as a banker - everything that's been planned for him by family and social class.

This extraordinary story of love, mystery and self-deception is based on true events. It's set in 1819 and tells how Mary Willcox, a cobbler's daughter from Devon, managed to pass herself off as a princess from the Far East, fooling not only the wealthy family who took her in, but various 'experts' who examined her.

The story begins with a brutal scene in which 17 year old Mary, alone and exhausted on the road, is raped by two men. She was on her way home to Devon from London - where the man she loved had deserted her and where her newborn baby had died. After this attack, at her lowest ebb, Mary longs to become someone else. She reinvents herself as the Princess Caraboo, speaking no English, wearing a turban, and looking everyone boldly in the eye in a way that downtrodden Mary never could. She is found and brought to Knole House, home of the Worrall family, and immediately wins over Mrs Worrall, who is an amateur student of anthropology. But not everyone is convinced by Caraboo, and before long Mary finds herself wanting to escape but caught up in a net of her own making.

The story is seen from the viewpoints of several young people: Mary herself; Cassandra, the daughter of the house; Cassandra's brother Fred; and Will, the son of the local innkeeper, who falls for the self-centred Cassandra. Young Fred Worrall is in some ways the most interesting of these characters, as he changes from playboy to someone who sees women as human beings, and in so doing frees himself.

Through these various viewpoints we see love in its pure and corrupt forms, the way society treats women, and in particular the degrading lives of poor women - but all conveyed with the lightest touch in a story that sparkles with vitality.

I just want to add that this book was shortlisted for The Bookseller YA Book Prize. And that Catherine Johnson's latest novel, Blade and Bone, will be published this week.